By SR PareekRatlam (Madhya Pradesh), Nov 30 (IANS/ 101Reporters) In 2018, when heavy rain destroyed his soybean crops, Sunil Patidar of Shivpur was not worried as he had insured his crops under the Pradhan Mantri Fasal Bima Yojana (PMFBY).He filed for mid-seasonal crop loss claim immediately, expecting to use the money for the next crop cycle.Four years on, he still awaits the insurance amount. 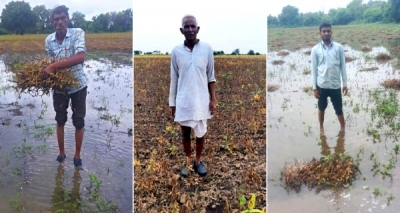 “I had taken a loan to sow soybean on my six bighas, but rains destroyed everything.The Patwari (revenue officer) surveyed the place and sent a report to the insurance company.Subsequently, my compensation of Rs 4,500 per bigha was approved.

Everything was in order, but the ICICI Bank allegedly misnamed Shivpur village as Sevria while submitting the claims information to the insurance company.Result: Sunil is yet to receive his money.

“The input cost of my soybean crop was around Rs 5,500 per bigha, but the insurance amount will barely cover it,” laments Sunil, who has moved the consumer court in Ratlam to get the insured amount.”They keep asking us what the compensation was for when there was no loss in Sevria,” he adds.

For Ramesh Patel of Dhamedi village in Ratlam, the payout for 2018 crop loss came to his bank account.But when it came to 2019 crop loss, the insurance company said the claim amount will be deposited only in the account of the land owner.”Our family owns a total of 35 bighas in the names of my wife and father Badrilal.When the insurance claim for 2019 was processed, my father’s Aadhaar number linked to his bank account was used.The claims money was apparently sent to his ICICI Bank account, but it was returned as the account was blocked due to KYC non-compliance,” says Ramesh.

“Now, I have opened a joint account with my father to avoid further delays,” he says.

Speaking on the issue, ICICI Bank’s Ratlam branch manager Satyanarayan Dangi tells 101Reporters that the land belonged to Badrilal, but the premium was deducted from Ramesh’s account.”In the first place, the insurance company should tell why it deducted money from Ramesh’s account.Not just that, Ramesh’s name is registered as Rameshchandra Patidar with the bank.

We can give compensation only to the bank account of the land owner, so the matter got stuck at our Ratlam head office.Their new account is now ready, so I will release the money in two to three days.”

Ramesh, who has also not received the insurance payout for crop loss in 22 bighas for the year 2020, says he initially hoped to sell his small stock of soybean spared by rains for a higher price later.However, due to the non-receipt of the claim amount, he had to sell it at a low price for arranging seeds and fertilisers for the next crop cycle.”Otherwise, jewellery would have to be mortgaged with the moneylender at high interest rates.”

According to reports, 38 complaints related to the 2020 kharif season remain unresolved till date.

Launched by Prime Minister Narendra Modi on January 13, 2016, the scheme aimed at reducing the insurance premium burden on farmers who take loans for their crops, besides protecting them from the vagaries of weather.

Even if the remaining premium is 90 per cent, it will be borne by the government.

Premiums are automatically deducted from farmers’ bank accounts and non-loanee farmers pay them in cash.

Farmers can inform the insurance company on its toll-free number when they incur losses due to unseasonal weather.The company then will send a representative to the site for damage assessment and filling up of an intimation form.

Patwari is also expected to be present at the site.Based on the uploaded form, the compensation amount is processed.

According to guidelines, after receiving the claim amount from the respective insurance company, the financial institution/bank should transfer the claim amount to the beneficiary account within a week.

A farmer getting insurance payout on time is dependent on every official completing his/her task properly at every step.

Poor management, negligence of officials and lack of accountability have all led to the insurance scheme becoming an inconvenience.Farmers complain that they do not get the desired response from the insurance firm.

They also claim there is no official at the local level to help them.Online submission is an insurmountable barrier for many.

Most farmers in the district resorted to the CM helpline number to air their grievances.There are several farmers who got the amounts two to three years later.Manvendra Rajendrasinh Jodha from Lunera got Rs 5.20 lakh this year for the crop loss he suffered in 2020.Similarly, Rahul Mohan Patel of Dharad received Rs 90,000 in May for the 2020 loss.All these involved persistent lodging of complaints with both the CM helpline and agriculture department.

Farmers complain that crop loss surveys are not conducted on time.Often, there is a delay in updating information on the insurance portal also.”Floods damaged my soybean crops.Patwari came on time to survey the loss, but the insurance company employee did not reach out for verification.

I complained to the tehsildar and he contacted the insurance company.Subsequently, an employee came and assured me that verification will happen soon.

Fifteen days have passed, nothing has happened,” says Rameshwar Lal of Sejavda village in Ratlam district.

Banshilal Patidar of Bhimkheda village says banks are the main cause of contention.”They neither update Aadhaar nor share information with farmers on time.They also delay uploading information online.” However, Mahendra Singh Dhanpal and Shantilal, both from Alot Tehsil, say they were inconvenienced by the agriculture department staff’s action of delaying online entry of claims.

“We staged a dharna at the Collectorate under the banner of Bhartiya Kisan Sangh.That did get us an extension in 2020 from March 1 to March 10 to make an online portal entry.But even then, the insurance amount was not received,” the farmers say.

Since they are transferred every two years, the bank officials in question could not be reached for comments.Meanwhile, Vijay Chaurasia, Deputy Director, Agriculture Department, says, “After the banks deduct premium amounts, the information has to be uploaded on the Union government’s portal.If not done, the claims cannot be processed.”

Acknowledging that 38 farmers in the district have lodged a complaint with the CM helpline, he says the amounts were not received mostly due to closure of bank accounts.”In such cases, banks return the amount to the insurance company.We are making efforts to get the money back.”

To this, Chaurasia says they have decided to solve issues that farmers face with insurance by holding workshops from time to time.A kisan rath will also be taken out through villages to exhort people to adopt Fasal Bima Yojana.

Farmers, however, say there is a need to decentralise the functioning of insurance companies by launching offices or help centres at the local level.

(S.R.Pareek is a Rajasthan-based freelance journalist and a member of 101Reporters, a pan-India network of grassroots reporters)