Jaipur, Nov 28 : The BJP will launch ‘Jan Aakrosh Rath Yatra’ in all 200 Assembly constituencies of Rajasthan on December 1, to mark Congress’ four years of “misrule” in the state. 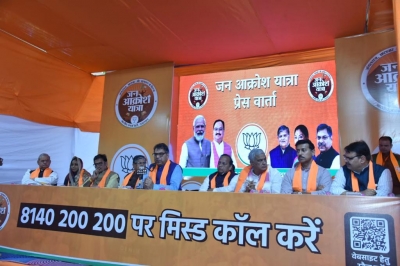 According to state BJP chief, Satish Poonia, the yatra shall cover 75,000 km on 200 chariots in 200 assemblies.

Addressing a press conference on Sunday, Poonia said that the chariots of the ‘Jan Aakrosh Yatra’ will be taken out by the state BJP in all 200 assembly constituencies against the “jungle rule, misrule and corruption” under the rule of the Congress government in the state.

Overall, 200 chariots will travel through 200 assembly constituencies in the entire state.

The party has also launched the theme song of Jan Aakrosh Yatra, which will conclude on December 14, in the press conference.

It released a missed call number (8140200200) for the general public, on which people would be able to register public outrage against the Congress government by giving a missed call.

Along with this, a charge sheet was issued regarding the misgovernance of the Congress government for 4 years and a website was launched, on which all the programmes related to the Jan Aakrosh Yatra will be updated.