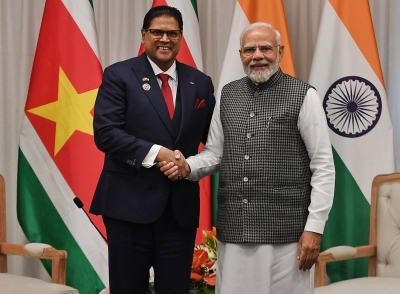 In their meeting, both leaders held discussions on cooperation in areas of mutual interest including hydrocarbons, defence, maritime security, digital initiatives and ICT, and capacity building.

President Santokhi is on an official visit to India from January 7 to 14, and is a special guest of honour at the PBD.

Suriname appreciated restructuring by India of Suriname’s debt arising from lines of credit availed by it.

During his visit, Santokhi will hold discussions with President Droupadi Murmu and attend the valedictory session and Pravasi Bharatiya Samman Award Ceremony on January 10.

He will also attend the inaugural session of Global Investors Summit in Indore.He will thereafter visit Ahmedabad and New Delhi.