New Delhi, Aug 15 : As India is celebrating 75 years of Independence the prime minister Narendra Modi on Monday hoisted the Tricolour at the Red Fort and addressed the nation to mark the occasion.When addressing the nation on the historical ramparts of Red Fort, Prime Minister Modi made a scathing attack on the ‘bhai-batijawad’ and ‘parivaar’ in his Speech and demanded that the citizens help eliminate this. 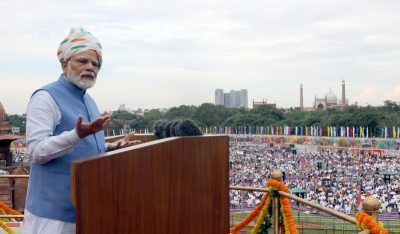 Modi declared that the potential will be the key to the development of the new India.”To clean every institution of India let’s change our focus from ‘bhaibhatijawad” and “Parivaarwad” and offer a chance to those who are deserving of this,” he said.

“Corruption and family politics are two of the biggest challenges facing India.We must fight corruption with all of our force” the Prime Minister Modi in his address.

The PM further stated that unless and until people are able to think of punishing the corrupt the country will not advance at a rapid pace.”Another issue we must combat is nepotism.We must give the opportunity to those who are gifted and who will contribute to the advancement of the country,” he underlined in his speech.

The Prime Minister stated that there’s no place for corruption in our society.He also said that the citizens of the country should unite as a nation to take action against those who have promoted the negative effects of corruption.”Today the nation is expressing anger at corruption, however sometimes people show compassion towards the corrupt.If and until people adopt the mindset of punishing corrupt people and the nation’s progress is not at a rapid pace,” he added.

This is not good for the country, he said.

To get help from citizens PM Modi declared, “Corruption is scooping out the foundation of India.I’m determined to fight it.I appeal to the 130 crore Indians to join me in fighting against corruption.” PM Rahul Gandhi said on the rampart of the Red Fort.

“Some people continue to praise those who have been found guilty of corruption and have spent some time in jail.

We need to ensure a culture of hatred for corruption and corrupt people,” PM Modi stressed in his address.