Chennai 18 August : After the former Chief Minister and co-coordinator of Aiadmk, O.Panneerselvam called for Unity in the party and offered a gesture of friendship to the joint coordinator Edappadi K.Palaniswami, the latter resisted the Unity talks.Palaniswami when asked by media people on the Unity conference of Panneerselvam stated, “He always makes such calls. 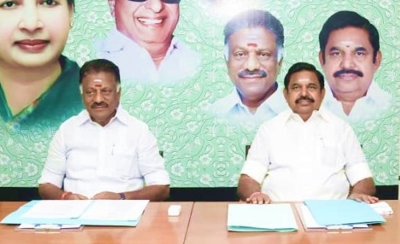 He has invited the people who he has launched “dharmayudham” (referring to the OPS battle against V.K.Sasikala and her family).Power is important to him.”

He claimed that it was Panneerselvam who was the leader of a mob that entered the party’s headquarters and ransacked the building while the party’s general council meeting was being held on July 11 in Vanagram.

Palaniswami said that OPS was not keen to name himself (Palaniswami) as the Chief Minister’s candidate in the 2021 elections for the assembly and that the delay resulted in losing the assembly elections by a small margin.

He stated that Panneerselvam was awaited his (Palaniswami’s) nomination as the leader of the Aiadmk legislature party, even though he was supported by of just 3 members, whereas he received the backing of the 63 members.

Palaniswami stated that the question of the single leader came up following Panneerselvam was making these moves and people began to lose faith in the party.

He said Panneerselvam had forged a link with the party’s primary adversary that is the DMK.DMK.

Panneerselvam had previously told media personnel that “bygones are bygones” and he was offering a gesture of affection to Palaniswami that he has since rejected.