By Vishnu MakhijaniNew Delhi, Sep 15 : “Only those who will risk going too far can possibly find out how far they can go,” T.S.Eliot wrote about the value of grit and determination.For travel writer, nature lover and marketing executive Saachi Dhillion, the adventure bug bit her on her very first international trip to New Zealand 14 years ago and left her yearning for more – including a trek to the Everest Base Camp to “push myself and see how far I can go”. 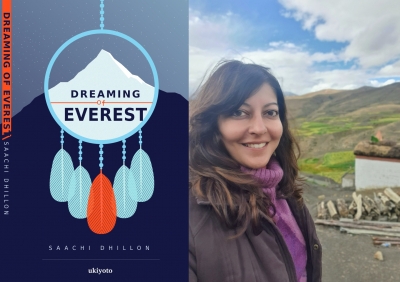 “The adventure bug bit me on my very first international trip to New Zealand.I tried many exciting activities such as kayaking, zorbing (rolling downhill inside an orb), and a Shotover Jet ride (through a canyon at over 85 kmph).I think it began from there.I have been lucky to have travelled extensively through 24 countries; having witnessed diverse cultures, met some of the warmest people, and seen incredible sights.

From monastery hopping in Bhutan, ATV riding in Siem Reap, wine-tasting in Provence, to ghost tours in Edinburgh.I owe a lot to travel and adventure.It has contributed significantly to who I am today,” Dhillon told IANS in an Interview for her book, “Dreaming of Everest”.

“I was looking for a challenge.To push myself and see how far I can go.That’s when I signed up for the Everest Base Camp trek,” she added.

She trained hard for it for six months, “come rain, (smog) or shine.

From running, strength, and conditioning to cardio, I diligently prepared my body and mind for the upcoming adventure.Acute Mountain Sickness (AMS) is a real threat at those high altitudes and that is what made me anxious in the months leading up to the trek.

I would run up nineteen stories of my building with a backpack to improve my lung capacity and minimise the chances of AMS.Needless to say, I was fitter than ever before in my life,” Dhillon explained.

Describing her book as “an inspiring, personal narrative about pushing your boundaries, following your dreams, and in the process, discovering a new part of you”, she said the aim of writing it “is to inspire even the hoi polloi to realise impossible dreams and prove that limitations exist only in the mind”.

“It was my dream to trek to Mount Everest.I still remember the first time I got a glimpse of the world’s highest mountain in Namche Bazar.We climbed up to the Everest viewpoint located high above the town on a clear, crisp morning.She stood tall amongst the other eight-thousanders.My heart brimmed with joy,” Dhillon declared.

The Everest Base Camp trek was also the first time that she was cut off from the rest of the world for such a long duration.

“There was no phone signal beyond day three.This gave me an opportunity to contemplate, reflect and think about the next phase of my life.Nature is a great teacher.

Its calming, healing, and revitalising forces are unparalleled as I realised on the expedition,” Dhillon said.

Close to base camp, her oxygen levels plummeted to almost 50 per cent – but that didn’t deter her from pressing on.

“Every step forward was hard.My body was not cooperating with my mind.My guide egged me on.The pain from my back pierced into my chest.It was probably the most discomfort I have experienced in my life.But, I kept going and completed the trek.

If you convince yourself that you can do something, you eventually will, as I learnt on this great adventure,” she said.

Another first on the trek was not having a bath for a week given the harsh conditions.”The germophobe in me survived!”

Somewhere along the way, she managed to write a poem encapsulating how she felt:

“The weight that we carry/Invisible at that./Yaks cross over, their bells tinkling;/We walk quietly, one breath at a time.

“Weary travellers young & old;/taking a sip of life./The journey stark and beautiful;/With friends like family,/Our feet Carry us as far as we choose,/What will your choice be?”

The icing on the cake, as it were, is the Foreword that renowned mountaineer, speaker and Sir Edmund Hillary’s son Peter Hillary has written for the book.

“We need more adventurers like Saachi Dhillion.People prepared to head out into what is for them the unknown.

We all have ‘unknowns’ that can only be known by being bold and taking the first step, and then another and another.The process is exhilarating and with every step, we learn about the challenge and what will be required of us, but also, we learn about ourselves.

Perhaps that is the most important learning of all.As Saachi says herself the journey highlights just how much ‘baggage all of us Carry in our lives’.And how in the end you can ’emerge lighter as your inhibitions float away into the thin air’.

“I think that realisation is a delightful and fine reason to trudge up the trails of the Himalayas to Everest Basecamp at 5360 metres altitude and the foot of the world’s highest mountain.As my father said, ‘It is not the mountain we conquer, but ourselves’.And that is the story of this book,” Hillary writes.

The uphill climb had taken nine days and the return to Lukla, from where the trek originated, took three days.

“Having reached Lukla after traversing 130 km, we finally celebrated with some song and dance and lots of local rum.Continuing with the tradition of many firsts on this trek, I lost my voice after too much singing and rum.It did return the next day – revitalised, ready to take on the next phase of life,” Dhillon writes.

What’s the next big adventure she’s going to be embarking on?

“I plan to climb a 6,000-metre mountain next and am currently preparing for it,” Dhillon said.

(Vishnu Makhijani can be reached at [email protected])