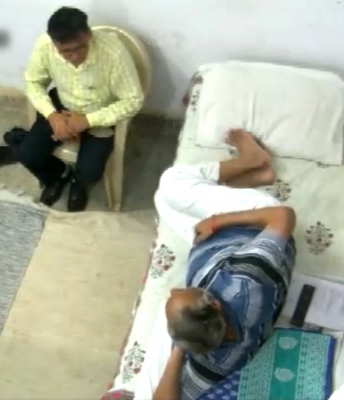 In the video, said to be of September 12, Jain can be seen interacting with four persons when the Superintendent arrives.

As per sources, the jail authorities have initiated an inquiry into the matter as to how the CCTV footage are being leaked.Jain has also moved a court in this regard.

The Tihar Authority is yet to issue an official statement on the matter.

Satyendar Jain was also accused in the matter.

They were accused by the CBI for allegedly hatching a criminal conspiracy, cheating and criminal misconduct.

During investigation, the ED learnt that Awasthi and others in IFFCO generated proceeds of crime and layered it through various unrelated entities and it was then transferred to the entities controlled by them.

The allegations include receipt of illegal commission by the accused from the overseas suppliers through a complex web of fake commercial transactions via multiple entities registered outside India (controlled by the accused persons) to camouflage the fraudulent transactions as genuine.

“Such payment of commission to them through their sons bleed the coffers of IFFCO & IPL and is a fraud upon the shareholders of IFFCO & IPL which consists of many State Marketing Federations wherein stakes are held by various State Governments,” the ED said.

The probe agency has also learnt that an amount of Rs 37.12 crore plus USD 6.18 million was received by Sanjay Jain in India through illicit means.

Earlier, the Enforcement Directorate had arrested Jain’s business partner A.D.Singh and Alok Kumar Agarwal with whom he had business relations.Singh had also received Rs 27.79 crore from Dubai through illicit means.Both Jain and Singh have used the vehicle provided by Agarwal to receive the Proceed of crime in India.

The ED had also filed a Prosecution Complaint before a Special Court in 2021 against six accused.