Patna 18 Aug : The day following JD-U MLA Bima Bharti made grave allegations against cabinet minister Leshi Singh, Bihar Chief Minister Nitish Kumar said that any post that was assigned to Leshi Singh was in line with her capabilities and that there was nothing improper in it. “If anyone has any concerns regarding an individual the leaders of our party will speak to her and discuss the matter.If she is not satisfied with the explanation, she is free to go wherever she would like,” Kumar said. 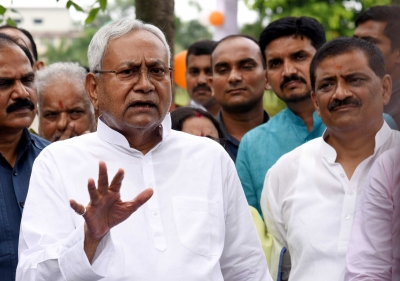 Nitish Kumar, on Thursday visited IGIMS with with the deputy CM Tejashwi Yodav and Finance minister Vijay Chaudhary to enquire about the health of cabinet minister Bijendra Yadav who is sick and recovering in IGIMS.

“We have had her minister twice.She was unable to comprehend the text of the oath in a proper manner.

We have assisted her to improve her reading skills, but she has not remembered the entire thing.I was shocked when I read her comments on Wednesday.

I had called her to arrange an appointment but she did not show up,” Kumar said.

The day before, Bima Bharti levelled allegations against fertilizer minister Leshi Singh, and claimed that Leshi Singh was implicated in murder, extortion, and anti-party activities.

Bharti said that in the event that Nitish Kumar does not take away Leshi Singh from cabinet, she would resign from the position of MLA and also from the party.

During the expansion of the cabinet that took place, 31 ministers, including three women ministers were sworn in on the 16th of August in Patna.

Bharti was hoping that her name to appear in the list of cabinet ministers, but was not named.