London, July 8 : Rafael Nadal has withdrawn from the Wimbledon 2022 ahead of his Friday’s semifinal against Nick Kyrgios due to an abdominal injury. 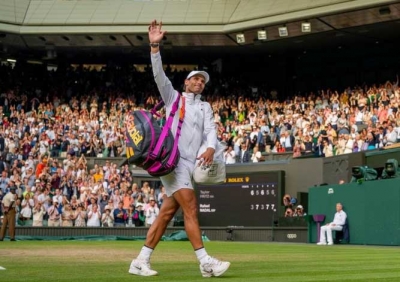 The 36-year-old Spaniard, on course for a calendar Grand Slam, announced he was pulling out after a 45 minute practice session earlier in the day in which he clearly looked hampered.

“I have been suffering with pain in the abdominal.there is a tear in the muscle.I made the decision because I don’t believe I can win two matches under these circumstances,” said Nadal at a press conference at the All England Lawn Tennis Club.

“Not only I can’t serve at the right speed, I can’t do the normal movement to serve.I don’t want to go out there and not be competitive enough to play at the level to achieve my goal.And there is a big chance to make the thing much worse,” he explained.

The withdrawal ends Nadal’s bid for the Grand Slam following his titles at the Australian Open and Roland Garros earlier this season.Nadal owns a 35-3 record this season, including four titles.

After withdrawing his name from the semi-final, Nadal gave Kyrgios a free pass into what will be his first grand slam final.The 27 year old Australian will meet the winner of Novak Djokovic and Cameron Norrie in Sunday’s final.

The star player had strapping on his abdomen during his fourth-round match but was in visible pain from the Injury during his quarter-final against Taylor Fritz on Wednesday.He took a medical time-out during the match and ignored calls from his dad and sister to quit and pushed through the pain to win in five sets.

Nadal’s serve was noticeably affected by the Injury and he was downcast during his post-match media commitments.World No 4 said that by resting now, he hopes to be able to resume his planned schedule within about four weeks.

“My hope is in three to four weeks it will allow me to do my normal calendar.In one week I will be able to play from baseline without serving.That’s a positive thing,” the Spaniard said.