Bhopal, June 24 : The Speaker of Madhya Pradesh assembly, Girish Gautam, faced voters’ ire in his own Constituency amid the ongoing three-tier panchayat elections in the state. 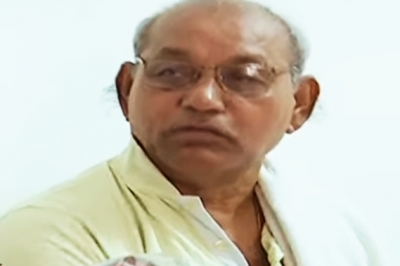 The villagers in the Deotalab Assembly Constituency in Rewa district accused Gautam of providing the benefits of government-run schemes only to his supporters, depriving the genuine beneficiaries.

A video has gone viral on social media, showing Gautam arguing with the villagers during campaigning for the panchayat polls.

Gautam was campaigning for his son Rahul Gautam, who is contesting the district panchayat elections.

In the 2018 Assembly elections, BJP nominee Gautam had won from Deotalab by defeating Seema Jaiveer Singh Sengar of the BSP by 45,043 votes.

Gautam was addressing a gathering to seek people’s support for his son who’s contesting the panchayat polls in his constituency.

However, the villagers, including women, openly said that they will not vote for his son because only party workers are being benefited by government-run schemes.

One of the villagers alleged that BJP workers are being provided direct financial assistance instead of following the due process.

“Only selected people are getting the benefits of government-run schemes, because they are BJP supporters, depriving the genuine beneficiaries of such schemes,” a villager was heard telling Gautam.

In reply, Gautam said that financial assistance has been provided only to the deserving people through the RTGS system.

Gautam said that he would resign from his post and quit politics if allegations of corruption levelled against his supporters are proved true.

“This is a false allegation and I know who is behind all this.If proved that my supporters did anything wrong, I will resign from the post of Speaker and quit politics,” Gautam said.

Notably, Girish’s son Rahul is contesting the panchayat elections under BJP’s banner and is facing opposition from one of his own cousins, Padmesh Gautam, who is a Congress candidate.

Padmesh, who is a local Congress leader, was accused of a murder and was in jail nearly a decade back.

“In front of the temple of Lord Hanuman, I challenge you to prove your allegations.If they are found true, this village shouldn’t cast a single vote in the coming district panchayat polls for us or for me in the coming Vidhan Sabha polls,” Gautam said.