Bhopal, Sep 28 : The Madhya Pradesh Congress has come up with a women centric campaign for the state assembly polls under which the party will reach out to reach out to all the women voters across the state. 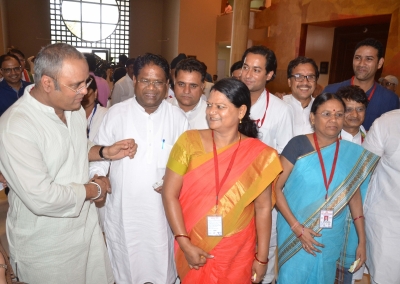 To excute it’s plan in an organised manner, the state committee has appointed a separate team for it on Tuesday.Vibha Vindu Dagor will lead the team.

As per the information, the team would carry a door-to-door campaign in both rural and urban areas and their primary focus would to reach to women.

They (team) have been tasked to held meeting with women associated with schemes such as Aganwadi, Asha and others.The party workers would share Congress’ vision for women empowerment.

Dagor, who is a vice-president of media department of Madhya Pradesh Congress Committee told IANS that she had already worked on a similar concept during the last elections and a massive response was received.

“I had put my proposal before the party leadership and I am happy that my proposal was accepted.Now, it’s my turn to make the plan success for which the leadership has shown trust on me,” Dagor, who is a native of Indore, said.

Dagor further said that in the first step to excute the plan, she would need a team of active and determined youths in each and every block and district.”Last time, when I was assigned a similar kind of task in Gwalior-Chambal area, I used to visit villages and conduct meeting with people.Initially, it was tough task, as people hardly used to come out for meeting due to Covid pandemic, but we managed to conduct meetings maintaining the Covid protocols.The best part was that the team was very active and energetic.”

Dagor said that during the 15-month government, the Congress has increased monthly wages of Aganwadi and Asha workers.”We need to tell the women, especially housewives, that the Congress has launched several women centric schemes.I believe, a proper communication will peruse a positive results and I will go ahead with the same thought,” she added.