Imphal 9 August, Imphal : The confusion raged over the five-day-old “economic blockade” which was declared by the All Tribal Student Union Manipur (ATSUM) on the National Highway 2 (Imphal-Dimapur) as the Manipur government announced on Tuesday that the protest was cancelled, while the student body stated that they would continue to protest.An ATSUM statement issued on Tuesday night stated that the emergency session of the organization as well as ATSUM Federating Units which was held on Tuesday condemned the agreement by the Manipur government as well as the Hill Areas Committee, and the ATSUM the ANSAM KSO-GHQ. 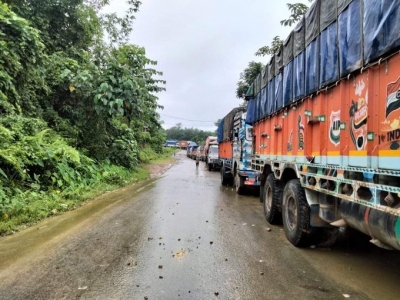 “The choice of the denunciation was made in the scenario of signing the agreement in the discretion and in the univocal capacity of the people involved in the agreement, without consulting with the executive of ATSUM as well as the Federating Units.The office of ATSUM suspends Vanlanlian Khaute from the post of Vice President of ATSUM with immediate effect for a infraction of the policies of the Union by unilaterally affixing the agreement’s signature” the ATSUM statement read.

It also stated that ATSUM is holding an emergency session of ATSUM, ANSAM, KSO-GHQ, ATSUM Federating Units and other senior leaders on Wednesday , to find a common path forward of the ongoing effort to introduce the recommended by HAC The Manipur (Hill Areas) Autonomous District Council Bill 2021 in the Manipur Assembly and its adoption.

Prior to that, according to state government officials the ATSUM who called for the protest on Friday in order to insist on the approval of the bill, have ended their protest.

Because of the Blockade more than 700 vehicles loaded with goods were left stranded until Tuesday morning on the National Highway-2, which connects Manipur with the rest of the country via road, through Nagaland.

“Security forces led 510 goods-laden vehicles to to their destinations from the afternoon of Monday,” a police official told.

The Manipur government, following marathon meetings on Monday and Sunday, reached an agreement with the agitated ATSUM officials on Monday.

Following the signature of the agreement the government released the five ATSUM leaders who were detained on August 2nd and sent to 15-day judicial detention by the Chief Judicial Magistrate Imphal West.

In accordance with the agreement that was signed by Manipur government, represented by the Tribal Affairs Minister Letpao Haokip, Hill Areas Committee (HAC) Chairman Dinganglung Gangmmei as well as three student leaders the 7th Amendment Bill of Manipur Hill Areas District Councils to devolve of the power of Autonomous District Councils has been submitted to the HAC and the HAC will consult with all stakeholders prior to suggesting it to the Manipur Assembly.

Officials from the government claimed they were pleased with the removal of the Blockade the Manipur government also restored mobile data (internet) services.

Special Secretary Home, H.Gyan Prakash, who was quoting the Manipur Director General of Police, in a announcement on Tuesday, stated that in the light of the positive developments in Manipur, the suspension of mobile and internet services in Manipur could be lifted beginning this day (Tuesday).

Every Mobile Service providers are hereby required to ensure that they comply with the provisions of this directive,” the announcement said.

The BJP government led by the Chief Minister N.Biren Singh introduced the Manipur (Hill Areas) District Council 6th and 7th amendment bills in the Assembly on Tuesday.However the ATSUM stated that these legislations aren’t in conformity with their demands.

The ATSUM has been protesting in the hills districts, including Kangpokpi and Senapati for quite a while and is demanding more power for the tribal councils of autonomous district.

In August of last year the Hill Area Committee (HAC) composed of MLAs of all 20 reserved tribal seats of Manipur has recommended the proposed Autonomous District Council (ADC) Bill to ensure “equitable development” in the hill districts in the same way similar to those in the valley region of the state.