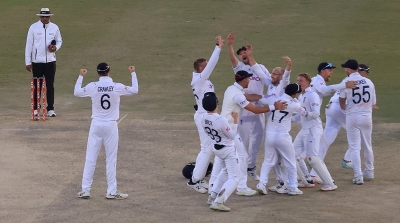 Pakistan were placed fifth in the ICC World Test Championship standings, but had a realistic chance of making the final because of the five home Tests against England and New Zealand.

However, a below-par performance on the final day at the Rawalpindi Cricket Stadium saw them lose their position of strength.

While England are virtually out of contention to reach the WTC final, the loss is a significant blow to Pakistan.Wins for Australia and India in their respective series’ would see Pakistan miss out.

Pakistan’s loss also puts India in control to reach the WTC final given that they can now secure their place even if they lose one of the Tests against Australia at home, provided they sweep Bangladesh, reports ICC.

If Australia win the remaining Test against West Indies and at least two Tests against South Africa, they would still be well placed to make the final.

Saud Shakeel and Mohammad Rizwan had kept Pakistan in the hunt with a steady partnership after the hosts lost Imam ul Haq to James Anderson early in the day.Rizwan took 24 balls to get off the mark, but then took on the spinners with Shakeel playing the perfect foil.Pakistan forced England onto the backfoot as the partnership gained strength.

On 156/3 at the stroke of lunch, Pakistan seemed in control and ready to push for a win.However, Anderson produced the breakthrough yet again, sending back Rizwan for 46 with a perfect outswinger.

Robinson, who had been brilliant with the ball right through the Test, then sent back Shakeel shortly after by tempting him with a fuller delivery that he drove straight to substitute Keaton Jennings.

Azhar Ali and Agha Salman survived through till tea but Robinson struck soon after, trapping Salman in front and then soon added Azhar Ali to his scalps to leave Pakistan in tatters.

Anderson then sent back Zahid Mahmood and Haris Rauf in the same over to all but seal the fate of the Test.