Lucknow, Dec 5 : After almost 999 days, Lucknow is all set to become a zero-Covid city. 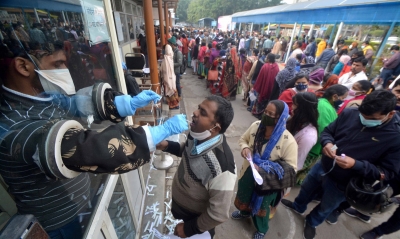 According to health department officials, on Sunday, there was only one active case of a 65-year-old man who was diagnosed with Covid-19 nine days ago at the Command Hospital after developing a respiratory infection.

His nine-day home isolation period ended on Sunday night.He does not show any symptoms and would be declared to have been recovered from the disease on Monday.

The existing patient who is on the path to recovery is the father of an Army jawan.

Coincidentally, the first case in Lucknow was a 35-year-old doctor from Toronto, who was the daughter-in-law of a retired Army officer.

As no fresh cases have been reported from the past four days, the active caseload of the city will be then zero – a dream for which thousands of healthcare providers, frontline workers had been working tirelessly for two years and nine months.

It will also be a moment to rejoice for the entire city as the pandemic which caused more than three lakh infections, claimed nearly 3,000 lives, inflicted innumerable physical and financial miseries and at one point of time appeared to be a never-ending nightmare, is finally breathing its last.

In the past 21 months, the city bore the brunt of three waves of the pandemic.

The first wave was caused by the Kappa variant of the novel coronavirus and was the longest that went on for nine months.It infected over 80,000 cases and claimed over 1,100 lives.

The second wave, triggered by the Delta variant, was the deadliest of the three.It caused more than 1.5 lakh infections in 81 days and claimed 1,400 lives.The variant penetrated deep into the lungs, causing severe illness and leading to high hospitalisation, resulting in a crisis of beds and oxygen in the city.

The third and the last wave was caused by the omicron variant that infected people in large numbers, but severity was low, and recovery was quick with minimum hospitalization.

In between the first and second wave, a massive vaccination campaign against Covid-19 was launched, which covered over 90 per cent of the population of the district.

Experts said that though the Covid-19 is on decline, it has taught many things.While it helped in getting the government’s attention on health infrastructure, including oxygen and ICU beds, it also pointed out the importance of wearing masks and hand sanitisation.

Chief medical officer Dr Manoj Agrawal said, “We should not take Covid-19 casually till it is completely eradicated.People should follow hand hygiene and wearing a mask will protect from pollution and also help in combating respiratory diseases.”