Jodhpur, Oct 3 : Chris Gayle and Yusuf Pathan may be representing different teams in the Legends League Cricket, but they share a mutual respect for each other’s batting prowess. 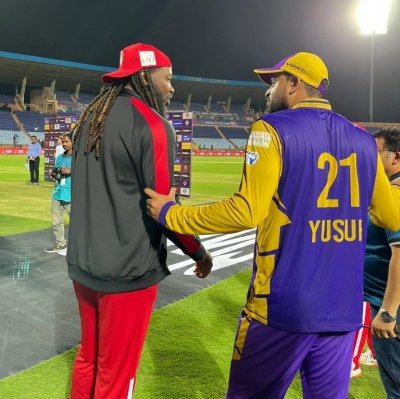 On Sunday they played crucial knocks for their respective teams, treating the Jodhpur fans to some power-hitting as Pathan’s Bhilwara Kings won against Gayle’s Gujarat Giants as cricket returned to the blue city after 20 years.

Playing against each other in their league stage match, Gujarat Giants’ Gayle hit a 40-ball 68 that included nine boundaries and three sixes while Pathan played a match-winning knock of 39 off 18 balls.He slammed four sixes and a boundary.

Both the batters admitted that they were in awe of each other’s batting capabilities and wanted to exchange bats with each other.

Pathan said that he always tries to learn from Gayle.”The way Gayle bats is praise-worthy.He has always been a power hitter and likes to dominate bowling attacks.I get to learn so much from him.

The Universe Boss Gayle in response said he is open to exchanging bats.”He wants my bat and I don’t know why.But I guess he wants something from the Universe Boss.I might exchange bats with him,” the former West Indian captain said.

Both these T-20 stalwarts, who have been on song so far in the season, will once again meet each other in the eliminator on Tuesday night when Gujarat Giants take on Bhilwara Kings.