By Armstrong VazDoha (Qatar), Dec 1 : A second half goal from Mathew Leckie helped Australia pull off a shocking 1-0 win over Denmark and its entry to the knockout stage of the FIFA World Cup for the first time in 16 years. 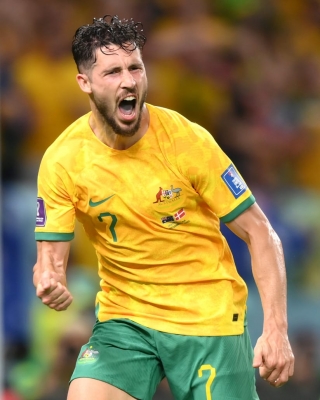 At the Janoub Stadium on Wednesday, Australia defended their 1-0 goal with some last-ditch defending to finish with six points from three matches for one loss and two wins, the same number of wins and points as France.

The defending champions however finished as group leaders ahead of Australia on account of a better goal difference, incidentally Australia had lost to France 4-1 in their opening group match.

Graham Arnold’s side thus made it into the round of 16 for the first time since 2006.On Saturday 19:00 GMT, they will play one of Argentina, Poland or Saudi Arabia depending on Wednesday night’s Group C results, in a continuation of a World Cup brimming with upsets and implosions.

France will take on Group C runners up with Wednesday two other matches between Argentina – Poland and Mexico- Saudi Arabia deciding on the top team from the group.

Australia manager Graham Arnold said the players were ready for the challenge ahead of the game: “[I’m] just so proud of the effort by the boys.Short turnaround but their effort was incredible.[It took] a lot of belief, a lot of hard work.These boys come in with a great mindset.We’ve been working on this for four and a half years.We have the belief, the energy and the focus.I could see in their eyes that they were ready tonight.”

Goal scorer Leckie said they were confident ahead of the match and knew that they could do it.

“I’m proud, exhausted, everything I think.It’s hard to describe the emotions right now.We always knew we could do it.We believed as a group.We had our doubters but with our spirit, our belief, our work ethic and how close we are as a group, it shows on the pitch,” said Leckie.

“That last 15-20 minutes we battled until the end and it didn’t matter what they threw at us, we weren’t conceding.We’ll make the most of it tonight but then it’s all about recovery because we’ve got another game coming up, he added.

The Danes, needing victory to progress, dominated possession but were caught out on the break when Australia scored the winner on the hour mark.So it was as a counter-attack which ended Australia’s agony and Denmark’s World Cup campaign.

Denmark lost the ball in the Australian box and Mathew Leckie finished a brilliant counter attack with a low shot past Kasper Schmeichel.

The Danes’ best chance came through Mathias Jensen in the first half, who forced Australia captain Mat Ryan into an impressive acrobatic save after being played through by a Braithwaite flick.

Denmark came into the World Cup tipped by many fans and pundits as ‘dark horses’ after their impressive run to the semi-finals of Euro 2020 and a strong Uefa Nations League campaign in which they beat France home and away.

In the end it was Denmark’s second-half impotence that ended their tournament prematurely, their early brightness dissipating in the face of a Socceroos’ side which left it late but rallied when it had to and once again displayed a level of quality.

Denmark on the other hand failed to impress in Qatar and go home having scored only once in three Group D games.