Bengaluru 15 August : Karnataka Chief Minister Basavaraj Bommai announced on Monday the possibility of a government job for a Member of the family of a martyred in his Independence Day address. “Soldiers commit their lives to defend the nation. 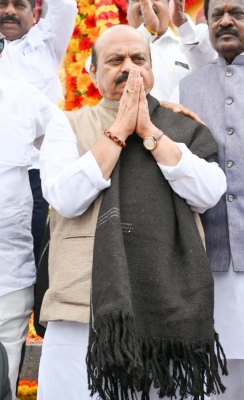 In the event of the death of soldiers from the state when they serve in Indian military forces, in order to give security to their families and their families, one of the members of the family of the Martyr will be granted a government job on compassionate reasons,” CM Bommai stated.

Bommai was the first to announce the decision during his keynote address in the event held at the Manekshaw Parade Ground in Bengaluru to celebrate freedom.

He added that he will be announcing the construction of toilets that are 100 percent clean at an expense of 250 crore in all colleges and schools of the state.He said that 4,050 Anganwadi centers will be established in the state and sixteen lakh children will be provided with nutritious food.

He said that the “Har Ghar Tranga campaign has been successful and that Prime Minister Narendra Modi has laid the foundation for a strong nation in the coming 25 years.”In the country, the Tricolour is being displayed on 40 crore homes as well as in Karnataka the flag of India is hoisted on 1.25 crore homes,” he said.

“The event must be celebrated in a united manner.

There should be no disagreement over the hoisting of Tricolour.We are all one under the flag of our nation.

In the Indian flag, we are all children of Bharat mata,” he said.