New Delhi, Aug 19 : One of the most well-known domestic Cricket coaches Chandrakant Pandit, earlier this week, was appointed the Coach in charge of the IPL franchise Kolkata Knight Riders.Pandit recently led Madhya Pradesh to their maiden Ranji Trophy title, having been crowned the champion of the nation several times with Mumbai and Vidarbha. 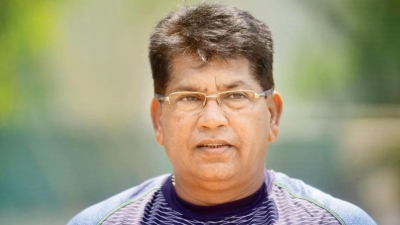 The ceremony was a celebration of his induction as Coach in charge of KKR, Chandrakant Pandit declared that the announcement came as a Shock in England.

Pandit stated that he was in England when KKR CEO Venky Mysore contacted Pandit and requested to meet up to have an interview.

“During Ranji season I got the message from KKR CEO Venky Mysore, wishing me luck in the finals.He also stated that we would meet in the near future, but I didn’t know it at the time.

Later, while I was in England he called me again, asking if I’m in Mumbai or not?” Pandit said to Jagran TV.

He stated that initially he did not notice anything, but after Mysore called him back and inquired when he will be returning to Mumbai “I was suspicious”.

“When I went back to Mumbai and met him, he offered me to become the head coach.

“It was a great honor for me to be a part of the KKR family.

I believe that the team has been doing very well and many of Indian players are in the squad,” he said.

In a further discussion about his outstanding record in the domestic Cricket field as a Coach Pandit stated that coaches don’t create players, but players do are the ones who make coaches respect and earn their respect.”Today regardless of what people say about me, I’m able to affirm that all credit belongs to my players as well as staff.In the same way I would like to acknowledge the association for the help they have provided to me.” he said.

“I’m certain that the god has a lot of blessings for me, as I’m sure that what I’m doing he helps with this.I always declare that the players put in their best effort into their work and the credit is all to them.I’ve always said that the players create coaches, and coaches don’t create the players.This is my simple belief,” Pandit said.

When asked about the secret that made Pandit one of the top coaches in domestic Cricket, Pandit said, “Every Coach has a strategy.

“I am aware that my approach isn’t well-liked by many players, but when the results are achieved they will realize that they have a good idea.This is a positive choice for me also for players since they must perform at a higher levels.

I believe that discipline is the most essential aspect for any human being regardless of whether he plays any sports or performing a work in any corporate company,” Pandit concluded.