Mumbai, Jan 11 : Arpan Kumar Chandel, who’s better known by his stage name King, and has become a household name with his rap number, ‘Sahi Galat’, in the Ajay Devgn-starrer hit movie ‘Drishyam 2’, is all set to perform at the Wireless Festival at Yas Island, Abu Dhabi. 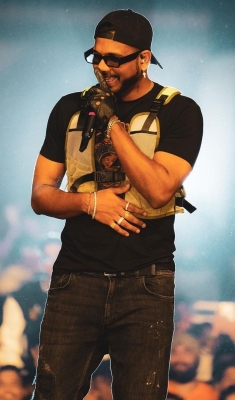 The Wireless Festival, a landmark event in the UK dedicated to hip-hop and urban music, is making its debut in Abu Dhabi this year.

The hip-hop star, who is also well-known for his single ‘Maan Meri Jaan’, will be representing the Indian sub-continent alongside international icons such as Travis Scott, Lil Uzi Vert, Wegz, Black Sherif and Ali Gatie.

King has seen his career graph going up ever since he participated in the first season of the rap-based reality show ‘Hustle’ in 2019; last year, he was seen as a squad boss on ‘Hustle 2.0’.

Talking about the upcoming festival, King said: “It’s going to be phenomenal to perform with such talented music icons and see India being recognised on the global urban music scene.”

Looking ahead, the rapper exuded confidence.He said: “I am grateful for the love and response I’ve been getting from across the country.I had a great 2022 but I’m built differently for 2023.It is going to be our year, watch us rule the global charts now.”

King To Perform At Yas Island Alongside Global Hip-hop Stars

King To Perform At Yas Island Alongside Global Hip-hop Stars