Jaipur 8 August : Rajasthan government on Monday announced the payment of Rs 5 lakh per for the family members of those who died in the midst of a Stampede in the Khatushyam temple in Sikar district.Chief Minister Ashok Gehlot has ordered an inquiry into the incident. 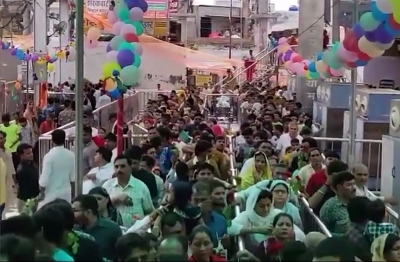 According to reports police officers were not present to manage the large crowd during ‘Ekadashi’.

Three women died and four others suffered serious injuries in a Stampede that was witnessed in the Khatushyam temple in Sikar, Rajasthan on Monday morning.

The incident occurred in the early hours of 5 a.m.at a time when the number of devotees had grown significantly for Darshan on day of the festival of ‘Ekadashi’.

It is believed that about one lakh people were at the gate at the time.

The devotees had been in the line since Sunday night and when the gates of the temple were opened in the morning the crowd went into a frenzy which resulted in the stampede.

While the investigation is ongoing the administration of the district has decided not to accept the incident as an act of crowding.

Sikar Collector Avichal Chaturvedi claimed that the incident was reported because of the pressure of the crowd as they opened the gate of the entrance.