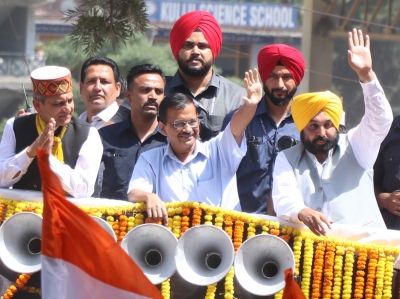 The Tiranga Yatra was organised from college gate to the main chowk, Dhalpur, where he addressed a massive crowd.He said, the party has arranged four raths to roll into the four Lok Sabha constituencies in the state to listen to the grievances of the people.

“We don’t know politics.Our journey started from Anna movement and then we formed a party.We vowed to eliminate corruption from the country.

We ended corruption in Delhi and then started the process in Punjab,” Kejriwal said.

Attacking the state government, Kejriwal said that every year budget worth thousands of crores is passed, but no work is being done to provide basic facilities to the people nor to give jobs to the employed youth.

“Where does the money go? The AAP, when will come to power, will investigate,” he quipped.

He said if people care about their children’s better education, employment, health, then they should also know which party can get all these things to them free of cost.

Mann, while addressing the AAP workers said that after Delhi, the process to wipe out corruption has begun in Punjab.

“Aam Aadmi Party’s government has completed 100 days in Punjab and corruption has also been reduced to a great extent.Kejriwal is working to bring the youth to politics and is strongly opposing the anti-people policies of the BJP and the Congress,” Mann said.