New Delhi, Dec 2 : A SpiceJet flight from Jeddah to Calicut was diverted to Cochin where it made an emergency landing on Friday. 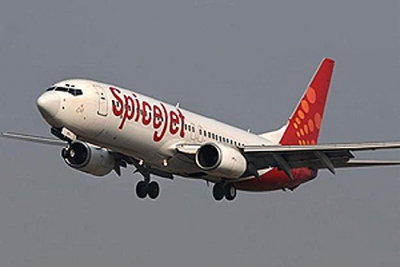 The flight carrying 197 passengers had to make an emergency landing at the Cochin International Airport (CIAL) on Friday evening following hydraulic failure.

The official said that later, the Jeddah ATC confirmed that tyre pieces were found on the runway.

“During further flight, a low pressure light got stuck illuminated.Associated NNC actions were carried out.As such the pilot decided to divert the aircraft to Cochin.During approach to Cochin, the aircraft carried out three low passes to verify the landing gear lever was down and locked,” added the official.

Post confirmation from ATC of landing gear extension, a safe landing was carried out at Cochin.Detailed inspection is under progress, said the official.

“On December 2, SpiceJet B737 aircraft was operating flight SG-36 (Jeddah – Calicut).After take-off from Jeddah, ATC informed the pilots that tyre pieces were found on the runway.During further flight, a caution light illuminated.The pilots decided to divert to Cochin where low passes were carried out to verify whether landing gear lever was down and locked.

Post confirmation from ATC of landing gear extension, the aircraft safely landed at Cochin and passengers were deboarded normally,” said an airline spokesperson.

Following an incident of smoke in a SpiceJet plane cabin, the aviation regulator DGCA had directed the airline on October 17 to send the engine oil samples of the entire Q400 fleet consisting of 14 operational aircraft to Pratt and Whitney, Canada, to ascertain presence of metal and carbon seat particles.

Moreover, the DGCA had also directed SpiceJet for inspection of bleed-off valve screen and housing for evidence of oil wetness.DGCA had initiated a probe after a SpiceJet flight made an emergency landing at Hyderabad airport after smoke was detected in its cabin on October 12.

The regulator had said that it is keeping a close watch on the situation and will take all appropriate action to avert any untoward incident.