Agra, Sep 13 : A new tourist season is about to begin with the World Tourism Day on September 27, but the city of grand monuments that draws over eight million visitors annually is hardly ready to welcome the guests. 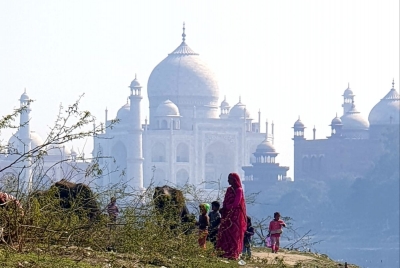 The hospitality industry, including hotels, travel agents, guides etc., is waiting anxiously for the tourists, after nearly three years of distressful wait due to the Covid-19 pandemic.

They are expecting a big boom as international travel is now near normal.

With the number of international chartered flights and air connectivity with several cities in India going up, the number of tourists is expected to show a remarkable increase this year, feel hotel industry captains.

This year, a new beginning is being made.

Mayor Navin Jain has announced that Sharad Purnima on October 9 will be celebrated as the birth anniversary of Agra.Big plans have been drawn up for a three-day carnival.

The city will be dressed up for the big show that would include musical performances, processions, cultural events, while the historical monuments will be lit up.

District authorities are expecting UP Chief Minister Yogi Adityanath to attend the annual Ram Lila Barat and celebrations at Janakpuri coming up in the Dayalbagh area.

The roads are being repaired and given a new coat, encroachments are being removed.The municipal corporation is spending several crores to facelift the area.

But even as a new tourist season is around the corner, the city administration is yet to wake up to repair and clean up the roads in the city which have not only become a safety hazard, but also assault aesthetics.

The tourism industry leaders are alarmed at the lack of concern and general apathy towards streamlining civic amenities vitally necessary for the visiting tourists.

When tourists, particularly those from the developed world, arrive in Agra, they are aghast at the dismal conditions.This results in short visits, same day return by most visitors via the Yamuna Expressway, say hoteliers.

The rains have exposed the claims of the city administration of having patched up or filled all the pot-holes and completed repair work on most roads.

The municipal corporation officials claim that work on filling of pot-holes is still continuing.

Jain has assured the citizens that prompt remedial measures would be taken to ensure safe mobility.

The city administration had claimed in June that all the drains in the city have been cleaned and there would be no water-logging anywhere.But the claim proved wrong in the first two big showers that inundated the low-lying areas.

“Presently, water-logging is not an issue, as rains have been scanty this year.A shortfall of at least 33 per cent is expected,” said social activist Nitish Shukla.

The biggest problems for the tourists are the monkey and the stray dog menace, in addition to cows, say the hoteliers.

The city administration has failed to contain the simian, canine and bovine nuisance around monuments, and there have been numerous instances of tourists becoming victims of attacks, says tourist guide Ved Gautam.

Also, the city police have failed to demolish encroachments around the monuments.

The city appears in shambles, with heaps of garbage dumped along the railway tracks, the Yamuna river bed turning dry while polluted areas continue to irk the visitors.But there is no sense of urgency among the official agencies entrusted with the task of transforming Agra into a smart city.