Leicester, June 26 : India failed to take quick wickets on Day 4 as their four-day warm-up match ended in a draw against Leicestershire County Club, here on Sunday. 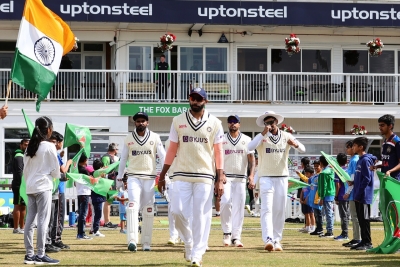 Chasing 367 for victory, the hosts reached 219 for four in 66 overs as Kimber (58) and Evison (15) remained unbeaten when the captains decided to shake hands.

Earlier in the day, India declared on their overnight total of 364 for seven.Half-centuries by Ravindra Jadeja (56 not out), Shreyas Iyer (62) and Virat Kohli (67) helped India set a target of 367 runs.

Overall, India managed to make the most of their four-day practice match against Leicestershire, getting their Test squad some time out in the middle ahead of the upcoming rescheduled fifth Test against England at Edgbaston.

On Day 3, the game had turned into an open nets with Cheteshwar Pujara batting for both sides, and Ravindra Jadeja and Shreyas Iyer getting two chances in the same innings.

The fourth and last day was no exception, with Jasprit Bumrah bowling for both teams as he got some overs under his belt.

Across three innings, Bumrah bowled 29 overs in total in the match for the solitary wicket of Virat Kohli, but this might just be the workout he needed going into the Test.

On the other hand, Mohammed Shami looked in fine form, sending down a fiery spell before being given a deserved rest with England in mind.

However, the brightest spot on Day 4 perhaps was that R.Ashwin, who had tested positive for Covid-19 at the time of departure for England, was on the field and got two wickets.Ashwin did not make the XI for any of India’s four Tests against England last summer, but could well make the cut for the rescheduled fifth Tes’ given he’s proven his fitness.

Ashwin had been a late arrival to England after testing positive for Covid just prior to travel, but was cleared to play on the fourth day and got straight into the action, bowling 11 tidy overs and picking up two wickets.

The spinner had Leicestershire’s captain Sam Evans stumped, but it was the wicket of Gill that would have given him the most joy on the day, making a subtle change to the field, tossing the ball up and luring the opener straight into his trap.

In batting, Shubman Gill’s quickfire 62 at the top of the order for Leicestershire was an encouraging sign on Sunday, with the opener looking in decent nick before he was outthought by Ashwin to bring his 77-ball stay to an end.

In contrast, Hanuma Vihari struggled at times, lacking fluency as he had for much of the warm-up match.The India batter was outperformed by Leicestershire youngster Louis Kimber, who reached his unbeaten half-century before the captains shook hands in Leicester.