Chennai, Dec 4 : Akhil Rabindra and Neel Jani secured a fantastic victory at the Feature Race in the Round 3 of the Indian Racing League (IRL) held here at the Madras International Circuit on Sunday and helped Hyderabad Blackbirds to continue on top of the league going into the last round of races. 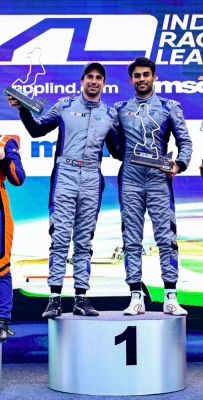 Akhil started the feature race in the 7th position on the grid.

He gained momentum quickly and caught up a couple of places before handing over the car to Neel Jani at the pit stop.

Neel Jani continued the pressure on the drivers in front of him and finished the race on the top ending the weekend on a high.

This will be Neel Jani’s last race of the IRL.

Earlier in the weekend, Akhil was unfortunate not to finish on the podium in Sprint Race 1.He started 2nd in the grid after Neel Jani finished 2nd in Qualifier 1 and was maintaining his position but encountered an unfortunate spin.Akhil eventually finished 5th in the race with a timing of 1:31.881.

The Hyderabad Blackbirds have maintained the top position on the table after Round 3 of the Indian Racing League with 206.5 points.

“It feels great to finish this round of the league with a win as we did not have the best of weekends as a team.We could not maximize our opportunities yesterday, but it is great that we have finished the weekend very well.Our aim going forward is to keep up the momentum going and finish on a high in Hyderabad,” said Akhil in a release.

“Winning the feature race is the best way of finishing the weekend, which has not been easy.The main aim was to go into the last round of races leading the championship.

It has been a great weekend of races in the IRL and the league has done a good job in conducting the races as it is not easy for a championship to get going in their first year.I wish Team Hyderabad and Akhil the best of luck to go get the championship,” said Neel after winning the feature race which will also be his last race of the IRL.

The final round of the league is set to take place on December 10 and 11 at the Hyderabad Street Circuit where Akhil and Hyderabad Blackbirds will look to continue their good form and win the title of champions of the IRL.

Akhil Rabindra is the only Indian to be competing in the European GT4 series and finished fourth in the recently concluded season.He competes for Racing Spirit of Léman in the GT4 Circuit.

On the other hand, Neel Jani is a former 24 Hours of Le Mans winner.

Neel has also competed in A1 Grand Prix, GP2 Series and Formula E and has also been a Formula One test driver.