London, Nov 30 : British Indian TV presenter Dr Ranj Singh slammed a ‘racist joke’ by a ‘white guest presenter’ at the recent 2022 British Curry Awards, even as Indians went on to become the largest non-white ethnic group in the United Kingdom. 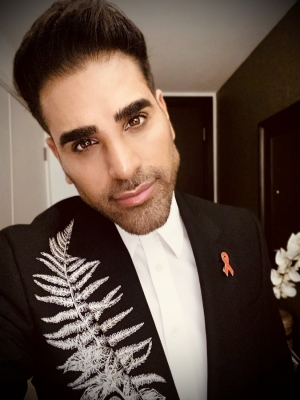 The 43 year-old NHS doctor posted the offending clip on his Twitter on Wednesday, where a male presenter is seen on stage saying: “Why has India never won the World Cup? Because every time they get a corner, they build a shop on it.”

He also called out to the award organisers for having an “all-white judging panel”, with a “white host” (comedian Hugh Dennis) and “90 per cent white performers”.

“I cannot stay silent.Dear @BritCurryAwardsa please, let’s talk about this.I’m not berating you as I know you have good intentions and are doing your best.And you have raised so much for charity.But we are better than this,” Singh posted on his Twitter handle.

In an open letter, Singh said that he was not the only person who felt “uncomfortable” at the awards ceremony.”I was honoured and privileged to be invited as a guest for the British Curry Awards tonight.

Firstly, thank you to this brilliant organisation for doing their best to celebrate our Asian community, the BAFTA award-winning presenter said.

“However, when the host is white, the judging panel is entirely white, the performers onstage are over 90 per cent white, are we really representing our community fairly?” Singh asked.

He also criticised the organisers for auditioning a piece of work by former Prime Minister Winston Churchill.

“And to top it off, we have a racist joke on stage, and are auctioning off a piece by Winston Churchill whose relationship with India (and Bengali people specifically) is problematic?” he rued.

In the 2021 census, which was released on Tuesday, the number of Persons of Indian origin in the UK increased to 3.1 per cent of the total population from 2.5 per cent (14.12 lakh) recorded in the 2011 census.

Of the usual residents in England and Wales, more than a million opted “Asian” as their high-level category for ethnicity and then “Indian” as their sub-category.

Singh, who stars on ‘This Morning’, concluded his post by saying: “We are better than this.We are a magnificent people.We have done so much and still have so much to offer.Let’s do better together”.

He added that he is proud of his Indian heritage, the Indian community and those who came to the UK before him, which is why he cannot stay silent on such things.

“We are not beyond criticism (and that includes me).But we are open to learn and grow,” he wrote with a heart emoji.