Harare 18 August : Deepak Chahar’s first explosion of 3-27, then three-wicket hauls from Axar Patel and Prasidh Krishna and unbeaten fifties from vice captain Shikhar Dhawan and Shubman Gill helped India to a stunning 10-wick Victory over Zimbabwe in their opening ODI series at the Harare Sports Club on Thursday.Following Chahar, Patel and Krishna’s efforts resulted in Zimbabwe being bowled out for 189 out in 40.3 overs.Gill (82 not out 4×10 6×1) and Dhawan (81 not out 4×9) were unbroken in their first partnership to slash the total and aid in helping India gain a the lead by 1-0 in the three-match series. 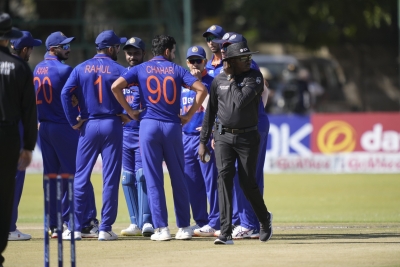 The win was also India’s third Victory of 10-wickets against Zimbabwe in ODIs, and their 13th consecutive win against Zimbabwe in fifty-over cricket.The main element of the Dhawan-Gill saga was how Dhawan who was the aggressor at first was able to take a back seat for a while before Gill was able to find his rhythm after an observant start in the match.

Dhawan started the pursuit of 191 with two boundaries back to back off Richard NgaravaA flick through the his fine leg, followed by a slice over the backward point.He as well as Shubman Gill were focused on the rotation of the strike with some shouts of lbw in between by the Zimbabwe bowlers.

Dhawan broke through the path of limits by cutting across the square gully, which was offered by Ngarava.When Gill continued to slow down Dhawan was quick to snatch Sean Williams and also had a chance to win after Brad Evans dropped the catch at the square leg.

Gill, who is now 24 balls without boundaries was able to get back-to-back boundaries in the same amount of balls as Evans.A cut on a quick delivery through the square area was followed by a cut through the empty slip region.

He finished the 14th over by striking through the cover point, and 16 runs escaped it.

Dhawan reached his 50 when he punched to long-on , and immediately following the ball he hit inside-out to score India’s hundred and complete the century of his first game with Gill.

Aided by extras and loose bowling by Zimbabwe’s Bowlers Dhawan and Gill were Unstoppable in the pursuit.Gill then smashed consecutive fours off Ryan Burl — a drive through extra cover followed by a smash through the cover point — to score his third fifty ODI in the past four matches in 52 balls.

Gill changed gears effortlessly by slapping a four as well as six over the leg-side boundary of Madhevere’s consecutive deliveries to score India’s 150.Dhawan and Gill took the remainder of the required runs with flawless effortlessness, with the latter’s short-arm pull being the highlight as India ended the match with 115 balls left.

In the earlier innings, a brilliant counter-attacking display by Evans (33) and Ngarava (34) sharing an unbeaten 70-run partnership for their ninth wicket, their best-ever against India as well as a huge contribution to helping Zimbabwe reach 200.

As Chahar was taking his time to get settled in, Siraj was looking sharp despite leaks of extras.The short ball worked for Chahar as he got a cramped Innocent Kaia for a room on the pull.The the thick edge was snatched behind.

He returned in the next over to see Tadiwanashe Marumani poke at a ball that was short and was nicked behind.

Siraj then reduced his length and allowed the ball to go away from Williams who swung the ball cautiously to provide a simple catch to the slip that was first.

Sikandar Raza opened the scoring with an impressive shot off Chahar and he was able to survive an appeal for lbw immediately following the ball.However, his time was short-lived by Krishna who had beat Raza several of times prior to.With a full ball, Krishna was able to push Raza ahead and forced him to go straight towards the slip first.Ryan Burl got going with two boundaries, but he misjudged a tug on Krishna’s ball, which went straight to the deep square leg.

Chakabva continued to defend the fort and threw Krishna to score a boundary.Luke Jongwe took Zimbabwe’s total past the 100-run mark in the 26th over with back-to-back boundaries.

A cut through the outside off followed by a stunning drive to mid-on.Patel took the brakes off Zimbabwe’s innings by casting Chakabva with an e-slide and then entrapping Jongwe in a lbw in the next over.

The fightback by Evans and Ngarava began.The duo flipped the ball and scored occasional boundaries.

Evans then hit Kuldeep Yadav into mid-wicket to get the opening six of the innings.Ngarava took advantage of Krishna’s deliveries off the outside to take them to the boundary before removing Patel for a massive six over the wide long-on.

When the fans began to cheer at the batters who were home Krishna took the stand of 70 runs to an end with a yorker off the side of the wicket, rattling Ngarava’s off-stump.Axar completed the match with Victor Nyauchi edging to first slip to put Zimbabwe’s innings below par 189.