Guwahati, Oct 2 : David Miller hit a whirlwind second T20I century, but it went in vain as India clinched their first-ever T20I series win at home over South Africa with a 16-run victory in the second T20I at Barsapara Cricket Stadium in Guwahati on Sunday. 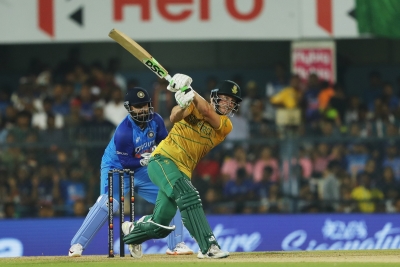 After the collective batting effort led by fifties from Suryakumar Yadav and K.L Rahul took India to 237/3, Miller hit an unbeaten, brilliant 106 off 47 balls, laced with eight fours and seven sixes, to also become the leading run-scorer for South Africa in T20Is.

He also shared a 174-run stand off 90 balls for the fourth wicket with Quinton de Kock (69 not out).

But with de Kock struggling to break free early in the innings, South Africa fell short by 16 runs.

Arshdeep Singh had Temba Bavuma and Rilee Rossouw dismissed for successive ducks in his first over.

While Bavuma was caught at mid-off, Rossouw’s top-edge was taken by cover holding on to a juggling catch on the third attempt.

Aiden Markram stepped up to be the aggressor for South Africa, looking gorgeous in steering and punching through the off-side while pulling crisply through mid-wicket to take the visitors’ to 45/2 in power-play.

His promising knock was cut short by Axar Patel, who got some dip to turn it away from Markram’s attempted cover drive and hit the top of off-stump.From there, Axar and Ravichandran Ashwin continued to put a squeeze on the scoring and pushed the required run rate very high.

But Miller had other plans, taking successive boundaries off Harshal Patel.In the next over, he took two sixes off Ashwin before ending the over with a pulled four-through square leg.After lofting flat over long-off for six off Arshdeep Singh, Miller reached his fifty in 25 balls.

De Kock broke the shackles of finding the ideal timing by slamming Axar Patel for two sixes and a four on three successive deliveries.

Miller continued to take a brace of fours off Harshal while de Kock’s improved timing saw him get his fifty in 39 balls.

Miller then unleashed carnage on Arshdeep, hitting sixes over deep mid-wicket twice while nailing fours through backward point and bisecting long-on and deep mid-wicket to perfection to take 26 runs off the 19th over.

With India fielding with an extra fielder in the 30-yard circle in the final over, Miller hit back-to-back sixes over long-on and deep mid-wicket to get his century in 46 balls.De Kock finished the innings with a six over square leg, but it was not enough for South Africa to avoid conceding the series to India.