Sanaa, Nov 25 : Three Yemeni soldiers were killed in the southern province of Dhalea in a drone attack launched by the Houthi militia, a military official said. 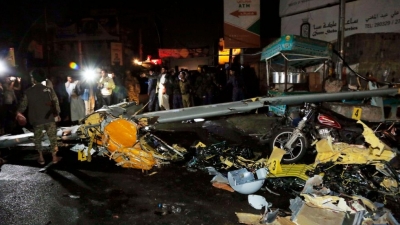 “An explosive-laden drone of the Houthi rebels struck the government’s military sites in the northwestern part of Dhalea, leaving three soldiers killed and six others critically injured,” the official told Xinhua news agency on Thursday.

The Houthis intensified their drone and missile attacks against the government forces in several southern regions in the past few days, he added.

“Similar drone attacks were carried out by the rebels against our troops stationed in the neighboring areas but caused no casualties,” he said.

On Monday, the Houthi militia launched a drone attack on an oil port controlled by the government forces in the southeastern province of Hadramout.

After the Hadramout attack, Prime Minister Maeen Abdul-Malik said that the Houthi rebels’ escalation of violence threatens the ongoing peace efforts in the war-ravaged Arab country.

Yemen’s military bases and commercial facilities, particularly oil ports controlled by the Saudi-backed Yemeni government, are facing a heightened threat of Houthi missile attacks after the expiration of a UN-brokered truce on October 2.

Yemen has been mired in a civil war since late 2014 when the Iran-backed Houthi militia stormed several northern cities and forced the government out of the capital, Sanaa.