Lausanne (Switzerland) The International Hockey Federation (FIH) on Tuesday announced that India’s Mumtaz Khan and Timothee Clement of France have been named the FIH Rising Stars of the Year 2021-22 in the women’s and men’s category respectively. 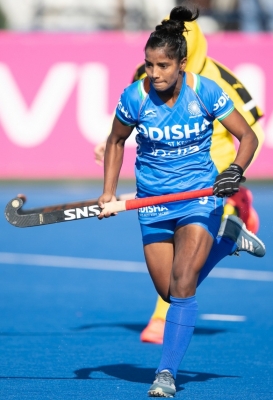 Mumtaz Khan burst on to the international hockey scene almost out of nowhere in the FIH Junior Women’s World Cup 2022, thrilling hockey fans with her incredible style of play and an eye for scoring goals that cannot be taught!

Mumtaz was the best performer for India in the Junior World Cup, scoring 8 times in 6 games.

She finished in the third place on the list of top scorers in the World Cup, as India missed out on a bronze medal by a whisker finishing in the 4th place.She failed to score in just one game throughout the tournament, against Netherlands.

Mumtaz scored both the goals for India in the crucial 2-2 tie in the bronze medal match against England, but the team couldn’t get over the line in the ensuing shoot-out.

Hailing from the city of Lucknow, in the north of India, Mumtaz started off her sporting career as a track athlete and it can be seen in her game as once she finds any semblance of space behind the opposition’s defense, she is impossible to catch.

Most of her goals in the World Cup came about in similar fashion as quick counters by the Indian team left opponents playing catch-up as Mumtaz burst through the ranks to go through on the goal.

Mumtaz was also a part of the Indian team that played in the Hero FIH Hockey5s Lausanne 2022 and showcased her improving skills scoring 5 goals in 4 games, in very different conditions that limited her ability to exploit open spaces, as she instead relied on her shooting skills to find the back of the goal.

The field was closely packed at the top of FIH Rising Star of the Year category, as Mumtaz edged Belgium’s Charlotte Englebert by a margin of just 3 points.Mumtaz finished with a total of 32.9 points with Englebert coming in second with 29.9 points.Luna Fokke from the Netherlands finished third with 16.9 points.

Timothee Clement had a stunning breakout season over the past year, emerging as a new hockey superstar with breathtaking performances in the FIH Odisha Men’s Junior Hockey World Cup 2021 as well as the FIH Hockey Pro League 2021-22, that led to many impressive wins for France, who continue to impress with each passing event.

Clement’s showing at the Junior World Cup was nothing short of extraordinary as France proved themselves to be the surprise package of the tournament, making it all the way to the semi-finals, and then taking down hosts India in the Bronze medal match to take a well-deserved spot on the podium.As the captain, Clement led his team from the front, as France demonstrated a relentless attacking style of play that resulted in goals galore.

Opposing defenses found Clement impossible to stop as he slotted in 15 goals at the Junior World Cup in just 6 games.

Those 15 goals included 4 hat-tricks, one of which came in the quarter-finals against Malaysia, and he scored another hat-trick in the 3-1 win over India in the bronze medal match.

Clement was also a big part of the French team in their debut campaign in the FIH Hockey Pro League 2021-22, featuring in all 16 games and starting in 15 of them.

He scored 6 goals in the Pro League games for France, as they produced some great team performances throughout the season, which included a draw against eventual champions Netherlands, and convincing victories over India, Argentina and South Africa.

Clement dominated the voting in the FIH Rising Star of the Year (men) category, scoring 38.8 points.Sanjay from India finished second with 23.7 points, and Miles Bukkens of Netherlands finished third with 19.1 points.