Los Angeles, Dec 5 : Harrison Ford and Helen Mirren first played husband and wife in the 1986 Peter Weir film “The Mosquito Coast”.The veteran actress has praised him and said that the actor taught her a “great deal about film acting”. 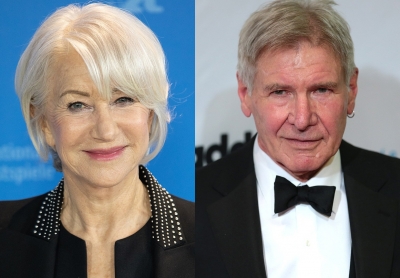 “When we first worked together, he was a huge movie star and I was like nobody,” Mirren told Variety with a laugh at the red carpet premiere of “1923” on Friday night, reports ‘Variety’.

“So I was very intimidated.”

By 1986, Ford had already portrayed Han Solo in the original “Star Wars” trilogy and starred in two “Indiana Jones” features.

“I admired her work and her person then, and I hold the same degree of admiration for her,” Ford said about Mirren.”She’s just a lovely person, so it’s been both a professional pleasure and also a personal pleasure to be able to work with her again.”

In the “Yellowstone” prequel series, the actors star as Jacob and Cara Dutton, a couple managing a family farm in 1920’s Montana while facing hardships during a period of Western Expansion, Prohibition and the Great Depression.

“We’re going to see people who we didn’t know about come into the universe and we are going to recognize certain characters who are now members of the present-day ‘Yellowstone family,” Sebastian Roche said.”In ‘1883,’ you saw the genesis of the Dutton family.This is the survival of the family.”

For Darren Mann, who plays Jacob’s great-nephew Jack Dutton, working with Ford and Mirren “was just like living my dream in reality.”

“One thing about her is she immediately puts you at ease.That’s one of her incredible qualities,” Marley Shelton recalled about her first day filming with Mirren.”Even though it could be intimidating to work with Dame Helen Mirren – Academy Award winner – she’s so incredible and just makes you feel wonderful and supported.”

“We made so many for him.All the different colours – trying the different creases, the different brims, the different crown heights.It was definitely a process,” Bryant continued.”Taylor is also very specific about the kind of hat that he likes, too.There was a lot of collaboration with Taylor, with Harrison and myself to create what I call the ‘Jacob.'”