Hyderabad, Aug 11 : The Godavari and Krishna rivers were in Spate with the heavy inflows from upstream states of Maharashtra and Karnataka. 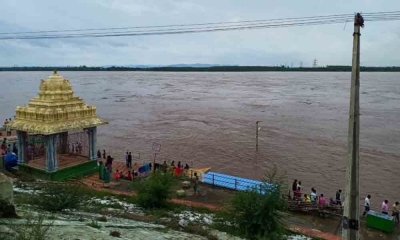 The water level in Godavari continued to rise at Bhadrachalam in Telangana, inundating low-lying areas and cutting off the road link in few places.

The river continued to flow above the second danger mark at Bhadrachalam.On Thursday morning, the water level at Bhadrachalam stood at 51.6 feet with the flow in the river touching 13.49 cusecs.

With the rise in water level, low-lying villages downstream were inundated.Road links Bhadrachalam to Dummugudem, Cherla, Venkatapuram and Wajedu mandal (blocks) were cut off.

According to the Central Water commission, Godavari is in a severe flood situation at Perur in Mulugu district of Telangana.

Meanwhile, huge flood inflows continued at Srisailam across Krishna river.The dam was receiving 3.88 lakh cusecs from upstream Jurala and Sunkesala.Authorities have opened 10 gates of Srisailam up to a height of 12 feet to release the water downstream.

The irrigation officials have also lifted 10 crest gates of Nagarjuna Sagar up to 10 feet to release the water downstream.The inflow at Sagar was 2.37 lakh cusecs.The current water level at Nagarjuna Sagar was 587.80 feet against full reservoir level of 590 feet.

The full capacity of Nagarjuna Sagar is 312.04 TMC while the current water storage is 305.30 TMC.