Panaji 9 Aug : Offer to Adopt the Primary Schools of the government that are scheduled to be merged because of lower numbers of students, the AAP’s Goa unit on Tuesday stated that they will increase enrollment and improve performance in the state, based on the Delhi model.A group of AAP leaders headed by AAP Goa unit President Amit Palekar handed over a memorandum the Director of Education Shailesh Zingde. 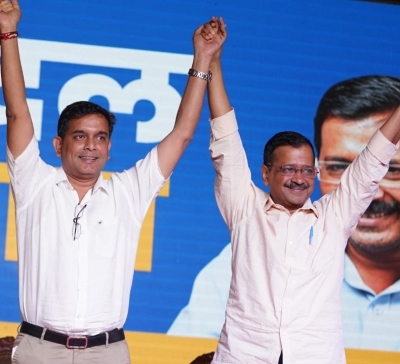 They asked Zingde to rethink the decision of merging the Primary government Schools in the interests of students and the general public.

“We are willing to assist the government but only with the understanding that these Schools won’t be shut down.

The government should not consider us as a political party rather, it should join forces with us in saving these Schools,” Palekar stated, adding that the students will receive additional resources, education and infrastructure with their ideas.

The AAP-Goa party has two MLAs in the 40-member State Assembly.

“AAP is prepared to assume these Schools if the government recognizes that it has not been able in providing Goan children with the educational facilities they require and deserve.We’ll show using our Delhi model how we can increase enrollment and improve outcomes in Goa too,” Palekar stated.

Palekar stated that the former Goa Chief Minister, late DayAnand Bandodkar set the stage of education through the establishment of state-run Primary Schools in every village across Goa with the sole goal of providing education to all and practically at their doorstep.

“Enrollment of students has dropped due to the effect of the BJP government’s complete denial of the state-run Primary Schools in the past few years.There is a way to increase enrollment we can accomplish it.” Palekar said.

“By merging Schools, children will be required to go to a school which will be between 4 and 5 kilometers from their home.The child will be faced with a lot of difficulties as a result of being required the walk carrying a heavy backpack because many of villages do not have transport facilities,” he stated.