Mumbai 19th, August 19 : Olympic gold medallist and Olympic wrestler Geeta Phogat, the life of whom the show ‘Dangal’ on, recently wrote an open letter in gratitude of the new series “She-Hulk: Attorney At Law’.Phogat who is a symbol of women empowerment, has stated in her letter, which states that she deeply resonates with “She-Hulk” and would like to play gym with her. 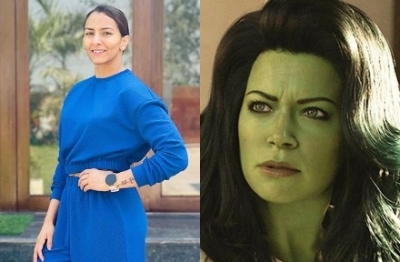 “Marvel ki sabse nayi superhero ko dekhke laga ki yaar ye bilkul humare type ki hero hai! (Looking at the latest superheroes from Marvel it’s as if she is one of us).”

The show will feature the actress Tatiana Maslany as Jennifer Walters or the character who is the title of She-Hulk.Tatiana will play her new sexy green avatar and play the role of lawyer in the show.

Geeta added in her letter which she shared on her Instagram: “Ekdum hatti khatti aur lambi chaudi.Mujhe to She-Hulk ko apna apna gym banana hai (She is physically fit, and I would like to have She-Hulk as my gym friend) Uski aur meri life bhi dekhaa kaafi to Kaafi ek Jaisi hai (our lives are very similar, if you observe).”