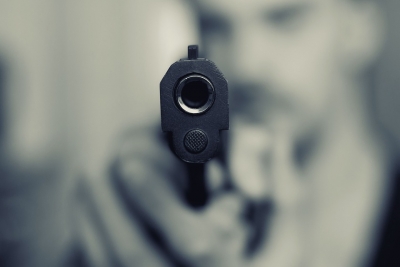 Following the incident, the police have sounded an alert, and are trying to nab those involved in the shooting incident.

Unfortunately, another man identified as Tarachand Kadwasara who had gone to meet his daughter studying at a coaching institute in Sikar was also hit by bullets during the firing and died.

Kadwasara was a native of Nagaur district

The video of the daughter trying to lift her father from the ground has gone viral on social media.

Director General of Police Umesh Mishra said that 4 of the 5 suspects involved in the Raju Thehat murder case have been identified.

“The situation in Sikar is peaceful and is being seriously monitored,” he added.

The police said the miscreants fled in a car after shooting Raju Thehat.

The police said they have information about the miscreants approaching towards Haryana and Punjab, and the police personnel are checking every vehicle.

“Raju Thehat was shot dead at the main gate of his house on Piprali road,” Superintendent of Police Kunwar Rasthradeep said.

Meanwhile, gangster Rohit Godara took responsibility for the killing that was “a revenge” against the murder of gang members Anandpal and Balbir Banuda.

Godara is a member of Lawrence Bishnoi gang.