Bengaluru 9 August : A new controversy has erupted following Karnataka Congress leader and MLA Zameer Ahmed Khan Monday announced that Ganesh Chaturthi celebrations won’t be Allowed on the spot that the Idgah Maidan is located in Bengaluru’s Chamarajpet.This statement came following the Bruhat Bengaluru Mahanagara Palike (BBMP) on Saturday, passed an order declaring that the property of the Idgah Maidan close to Bengaluru’s Chamarajpet is the property of the Revenue department and not the Wakf board. 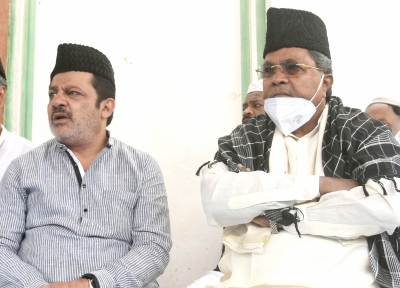 The former Karnataka Minister, who was at the Idgah Maidan and made it clear that for the very first time in the history of the tricolor will be hoisted on the grounds of Idgah Maidan.

He said he went to the Idgah Maidan with the sole goal of organizing large celebrations of the 75th Independence day.

Following the BBMP’s directive that said Idgah Maidan is the property of the Revenue department, the Congress MLA stated that the issue will be dealt with by the State Wakf board.

Zameer said that media are involved in making people feel uncomfortable to debate the issue and causing confusion about the Idgah Maidan scandal.

However, several Hindu activist groups have claimed the property that the Idgah Maidan is situated was previously used as a playground, and that the property belongs to the government of the state, they should be Allowed to hold Hindu festivals on the location.

The Hindu group’s activists have demanded that should the Idgah tower is torn down from the site, it won’t cause violent clashes between communities in the future.