Washington 9 August : US President Joe Biden on Tuesday signed the historic $280 billion CHIPS and Science Act into law that contains $52 billion to help boost the production of semiconductors in the United States.The CHIPS and Science Act is the Biden administration’s attempt to encourage chipmakers to change their strategy and create factories in the US and reduce dependence on China. 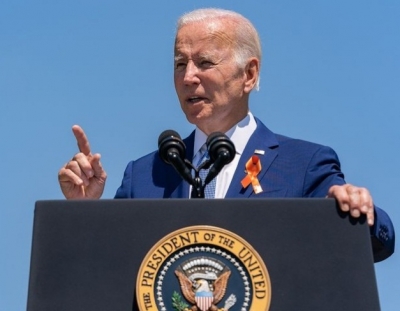 “Today I signed into law the CHIPS and Science Act.It’s a once-in-a-generation act which invests in America by accelerating our efforts to produce semiconductors in America,” Biden said in tweet.

“Today is a more secure economy, more jobs and a brighter potential for the future of our country.America is providing,” he said, noting that the future of the microchip industry will be made in America’.

The in the month of December last month, the US Senate and the House approved the $280 billion CHIPS and Science Act to increase innovation in Science and technology in manufacturing, semiconductors and other fields of technology.

“The American people may not be aware of that semiconductors are an integral part of their daily lives.

The bill also provides an additional tax credit to semiconductor manufacturing.It which will provide $1.5 billion for the development of technology for US companies that depend on foreign telecoms as per Forbes.

In the meantime, South Korea is reviewing its potential possibility of participating in the American-led alliance for semiconductors from the point of view of national security and is not planning to create an exclusive grouping to fight China.

Industry Minister Lee Chang-yang announced the comments Monday amid worries that South Korea’s potential joining of the “Chip 4” could lead to friction with China which is the most important trading partner, if it evolves to become an exclusive grouping with Beijing.

The Chip 4 is an envisioned alliance of semiconductor powerhouses that is envisioned to include the US, South Korea, Japan and Taiwan widely believed to be an alliance against China and aimed at reducing China’s influence in global supply chains.