New Delhi, Aug 9 : Nitish Kumar was diligently planning to separate from the BJP in Bihar over the last three months.In the meantime, he did not antagonise the saffron party and even offered support to its presidential and Vice Presidential nominees.The BJP was on Tuesday was beaten down by Nitish Kumar’s JD(U) the party’s oldest allies in the state was not even given the chance to control its damage. 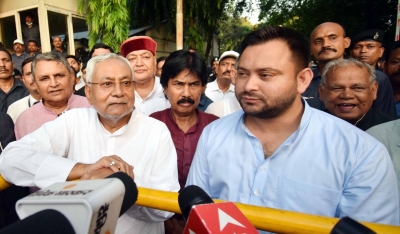 Nitish Kumar has now the support Letter that has been signed by all MLAs of the seven-party “Mahagathbandhan” (grand alliance) including one Independent member.

The idea was to give the BJP the chance to put forward opposition claims.

Sources have said that a consensus on the government’s formation is in place, which includes keeping Nitish Kumar as Chief Minister.

the RJD’s Tejashwi Yadav to be his deputy as well as Speaker of the RJD.

According to sources the prospect of five lakh jobs to youth is one of the main points of RJD’s union with JD(U).

The RJD had endorsed the notion of public welfare, and its manifesto included a promise of 10 lakh jobs.

“The first step will be to announce the awarding of new jobs” claimed an insider who claimed there is no difference between JD(U) as well as the RJD regarding the power sharing arrangement.

The Congress is likely to be granted an Official berth following an agreement was reached during the talks, and the Left parties could extend their assistance from outside.

On Tuesday afternoon, Nitish Kumar and Tejashwi Yadav travelled to the Raj Bhavan to stake claim to form the government of the future.

Prior to that, Nitish Kumar met Governor Phagu Chauhan to offer his resignation.

He then headed straight to the house of Rabri Devi at the 10 Circular Road to meet Tejashwi Yadav and the other members of the Mahagatbandhan.