Kolkata, Nov 28 : Reports of frequent intrusions into human habitations in the Terai and Dooars forest zones in North Bengal, especially in the tea gardens located in the area, have prompted the West Bengal forest department to conduct a census of Asiatic black bears in the state. 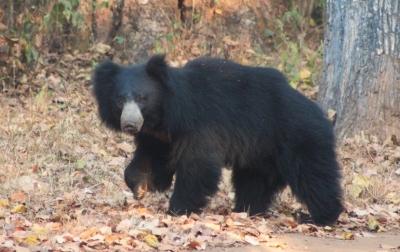 Forest department sources said that since the last one year, especially with the advent of the winter season, the movement of Asiatic bears have been noticed in certain unusual pockets of Terai and Dooars regions, which were not frequented by these animals before.

The officials feel that there has been an increase in the number of bears in the region, which is prompting them to scatter into human habitations.

“A workshop has been held in the area for bear census.If everything goes as planned, the census work will start from next month,” an official said.

Forest department sources said that since the past one year, Asiatic black bears have been spotted in the pockets adjacent to Malbazar, Dhupguri, Madarihat and Buxa in North Bengal.

In the last 15 days, as many as six bears were rescued by the forest department from these pockets.These unusual frequenting led to man-animal conflict in the region, in which one person was killed and some others were injured in bear attack.

An Asiatic black bear was also killed in the process.

“The first move to stop this man-animal conflict is to conduct a census following which the reasons will be identified as to why the Asiatic black bears are coming down from the mountains to the plains and inhibiting human habitations, especially the tea garden areas.Shortage of food can be a reason for this.After the census is completed, the forest department can consider the next steps on preventing man-animal conflict,” a forest official said.

Meanwhile, local wildlife activists have welcomed the move.They feel the state government should also hold an awareness drive in the tea garden areas to prevent this man-animal conflict.