Fans of Pawan Kalyan have been utterly disappointed when the star hero announced his entry into full-fledged politics and said that he will not be doing films anytime in the future.But now, after announcing his return to films, all his die-hard fans are desperately waiting to catch their favorite hero’s first look poster after more than 2 years. 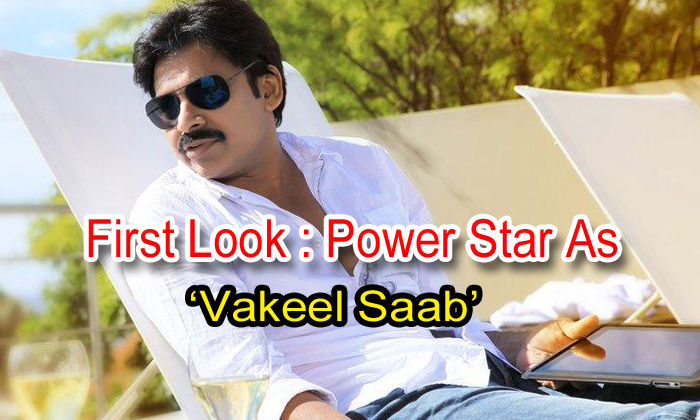 Now the much-awaited first look poster of Powerstar Pawan Kalyan’s next film has finally arrived and it’s just phenomenal.The film has been titled ‘Vakeel Saab’ and this mega hero is seen lying on the back of a truck resting his legs to a wooden chair with black shades on and a full beard along with a book in his hands showcasing his trademark heroism.

Pawan apparently plays the role of a lawyer who fights for three young girls who get wrongly accused of murder in this film.Anjali, Nivetha Thomas, Ananya Nagalla and Prakash Raj play key roles in the movie.Social media fans are celebrating this occasion with a nationwide Twitter trend with the hashtags- #VakeelSaab and #PSPK26FirstLook.

Nani’s ‘MCA’ fame Sriram Venu is directing ‘Vakeel Saab’ and Dil Raju is producing the film in association with Boney Kapoor under his Sri Venkateswara Creations banner.SS.Thaman is composing the music and the first song from this film will be out on 8th Match on account of Women’s Day.The teaser also is expected very soon while the film is aiming for a worldwide release in May.