Doha, Nov 30 : Spain coach Luis Enrique was giving nothing away about his line-up to face Japan on Thursday in the last round of matches in Group E. 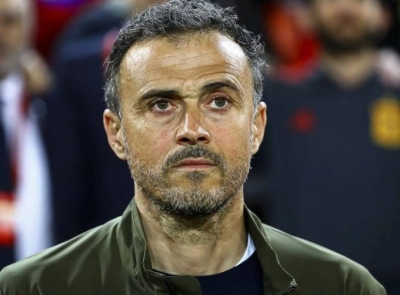 A draw will be enough to see the Spanish through and even a defeat would possibly still see them into the last-16 on goal difference and the coach is expected to make some changes as he rests players such as Sergio Busquets and Jordi Alba, while preferring not to risk Gavi and Rodrigo Hernandez, who have struggled with slight physical problems in the last couple of days.

“We are not going to speculate with any player,” Enrique told the press ahead of his game, before adding that whoever played, Spain would go for the win.

“We want to win to be first in the group of death.We have no intention of speculating because we want to be the first,” he said.

A win would put Spain on track for a possible quarter-final clash with tournament favourites, Brazil, but when asked about the possibility of finishing second to avoid Brazil, the Spain coach was clear with his preferences.

“I hope we do play Brazil, because that means we have won our group and got through to the last-16.”

“We have discussed (finishing second in the group) it, but it’s pointless, because you can be knocked out in any game.We aren’t looking at who we could play in the round of 16 or Brazil in the quarterfinals.”

“If you want to win a World Cup you have to beat everyone, and that is the objective,” insisted Enrique, who also valued a Japan side that shocked Germany in their opening match.

“They have seven players who were at the Olympic Games, where we beat them in extra time.They also have players in Europe, some in the Bundesliga.They are dynamic, fast and stick close to you.”

“We won’t have much time to think because they have a great midfield, with a lot of good players.I expect us to control the ball, but I also expect it to be a very difficult game,” he insisted.

FIFA World Cup: We Want To Beat Japan To Win The Group