Tehran, Jan 20 : Iranian President Ebrahim Raisi has described the agreements reached with Russia in the energy and transportation sectors as “constructive and positive”. 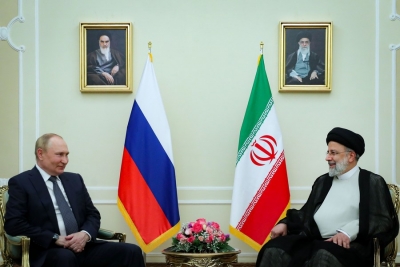 Raisi made the remark on Thursday in a phone call with his Russian counterpart Vladimir Putin, highlighting the necessity of expanding cooperation and coordination between the two countries, according to the website of the Iranian President’s office.

Turning to the regional issues of common interest, the Iranian President said Tehran supports the resolution of Syria’s issues through the Astana peace process, launched in January 2017 under the initiative of Turkey, Russia and Iran.

Putin, for his part, expressed his country’s readiness and willingness to improve cooperation with Iran in the energy and transportation sectors, Xinhua news agency reported.

The Russian President also stressed the importance of the Astana process for the resolution of Syria’s problems, saying all sides are committed to the negotiations.

In another phone conversation last week, the two Presidents discussed the expansion of economic cooperation, particularly in the energy and transportation sectors.

Both targeted by sanctions, particularly those of the US, Iran and Russia have recently expanded their bilateral political and economic cooperation in response.