Usually according to our Hindu traditions we make an offering to God with great devotion.However, it is our custom to offer any sweets as an offering to the Lord. 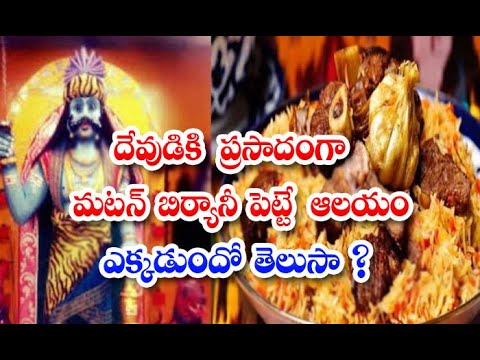 But in some places we see the offering of trunks and chickens to the village deities.

Even during such sacrifices, we offer sweets as offerings to the seller.

But have you ever heard of putting mutton biryani as a delicacy for the master.This is true no matter how surprising to hear.

But where is the temple where the god Mutton Biryani is kept? Let us find out why this custom came about.Muniyandi Temple is located in Madurai, Tamil Nadu.

Devotees offer mutton biryani to the Swami at this temple.

But what is the reason behind giving mutton biryani to Swami in this way when it comes to when this custom comes from.

In 1973, a man from Vadakampatti village in Madurai district started a hotel business.He was overjoyed that his business had grown from three flowers to six nuts and the Swami of a nearby temple happily offered them mutton biryani as an offering.

Thus it has been a tradition since then for all the devotees of this temple to offer mutton biryani as an offering.

Devotees who still visit this temple offer mutton biryani to the Swami.