There is so much meaning and transcendence hidden behind every deed done according to our Hindu traditions.That is why every single task is performed in a very traditional way.As part of this, we see such events at every step of the way at our home wedding. 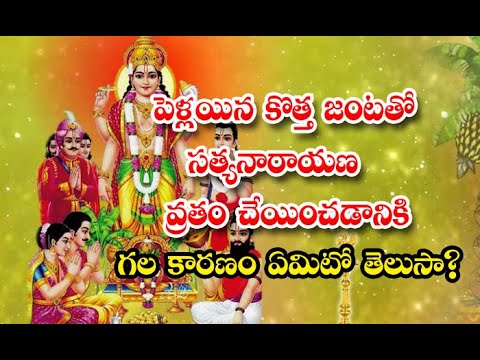 Similarly, after the marriage ceremony, we see the girl being taken to her in-laws and Satyanarayanaswamy performing vrata with the newlyweds.

But let us find out here what are the possible reasons for newlyweds to perform Satyanarayanaswamy vrata.The newly wedded couple must have the necessary supplies to start a new life which must surely have the grace of Satyanarayana Swamy.

In addition, Satyanarayana Swamy has to perform vratham in order to fulfill our desires without any hindrance.Usually this Satyanarayanaswamy vrata is celebrated with great pomp and ceremony by the family members during the famous month of Kartik.

Thus it is believed that performing this rite in the month of Karthika will bring all happiness.

Satyanarayana Swamy is the incarnation of Brahma, Vishnu and Maheshwara.

Therefore, it is a firm belief that if Satyanarayanaswamy performs vrata by those who are married, their marital life will go smoothly without any setbacks in their new life and that Satyanarayanaswamy will protect them from any quarrels between them.That is why this Satyanarayanaswamy vrata is performed by the son and daughter-in-law in Attavarint after marriage.

Satyanarayana Swami invites all the people of the village to perform special pujas and listen to their story while performing this ritual.Similarly the new ax is introduced to all the people of that village – Do You Know The Reason For Satyanarayana Vratham With A Newly Married Couple telugu-title:పెళ్లయిన కొత్త జంటతో సత్యనారాయణవ్రతం చేయించడానికి గల కారణం ఏమిటో తెలుసా? Read More 👉👉https:/telugustop.com/?p=1515098 – Telugu Bhakthi #TeluguBhakthi #Bhakthi #Devotional #TeluguDevotional #Telugu #TeluguStop Channel:Telugu Bhakthi