Birmingham, July 31 : Indian weightlifter Jeremy Lalrinnunge was in a daze as he set about to warm up for the Men’s 67 kg division competition at the Commonwealth Games here.The 19-year-old weightlifter, the favourite for the gold medal going by past performance, felt pain in his left thigh and hips region and it was so uncomfortable that he could not lift his usual weights during warm-up, managing a below-par 140 in clean and jerk. 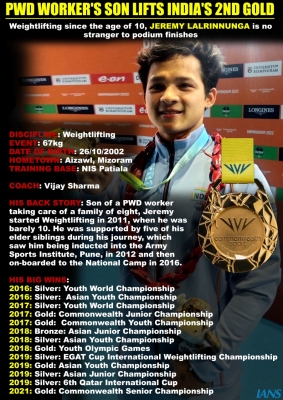 But the star Indian weightlifter fought through the pain Barrier on Sunday and came up with a brilliant performance to clinch a gold medal in the Men’s 67 kg division at the NEC Hall 3 at Solihull — the total aggregate of 300kg helping him write and rewrite the Games Records on four occasions in all.

This was India’s second gold medal in the Birmingham 2022 Commonwealth Games, adding to the one that Mirabai Chanu won in women’s 49 kg on Saturday.Jeremy’s effort also took India’s total tally a the Commonwealth Games 2022 to five medals — two gold, two silver and one bronze — all coming in weightlifting.

Lalrinnunge completed his last two lifts in clean and jerk and fell down on the mat on both occasions, clutching his back and thighs after the second, and wrist and elbow after the third.He had an advantage of 10 kilos on Nigeria’s Edidiong Joseph Umoafia (130) and a further three kilos on Samoa’s Vaipava Nevo Ioane in snatch.

Despite his discomfort, Lalrinnunge, egged on by vociferous Indian supporters, attempted to further increase the gap by attempting to lift 149 kg on his third and final snatch turn but failed.If he had managed a successful lift, he would have had a bigger advantage over his close rivals and could have taken things a bit easier in clean and jerk He had to be satisfied with 140 in the snatch — setting two Games records in the process.

“I had pulled a muscle in my thigh and hip regions early in the morning.We had used the services of the physio and though it reduced the impact, it was still uncomfortable,” Lalrinnunge said after clinching her gold medal.

However, things became a bit closer for his comfort.Lalrinnunge started at 154 in the first attempt and lifted 160 in his second before he fell on the match, clutching his leg and rolled around.

Coach Vijay Sharma rushed out to the podium and escorted him back to the warm-up zone.The physio, who was at the weightlifting venue since the morning tending to his muscles, tried to treat the muscle pull further.

The Samoa lifter successfully lifted 166, thus overtaking the Nigeria with a total of 293.and a gap of only seven kilos between gold and silver.Lalrinnunge attempted to lift 165 in his third turn but failed, thus leaving the door ajar for Somoa’s Ioane to go for 174 in his last attempt and go past Lalrinnunge and win the gold medal.But he failed in that attempt and Lalrinnunge secured the gold, and the coaches heaved a sigh of relief.

“I felt this uncomfortable pain in his thighs and hip from the morning itself and actually completed the clean and jerk as if in a daze.I had no idea what weights I was lifting and what were the others doing,” Lalrinnunge said after the medal ceremony.

“My coach, Vijay Sharma was amazing and guided me through the entire event with care.He picked up my weights with care, first assuring that I get the medal.

I am very thankful to him,” said Lalrinnunge.

Indeed it was a great performance — both by Jeremy Lalrinnunge and his coach Vijay Sharma that India managed to win their second gold medal.