Birmingham, Aug 8 : The grand old man of Indian table tennis, Achanta Sharath Kamal turned the clock back to make his first Singles final since 2016 as he prevailed over Paul Drinkhall of England to set up a summit clash with another Englishman Liam Pitchford, who got the better of India’s G Sathiyan to prevent an all-Indian men’s Singles final. 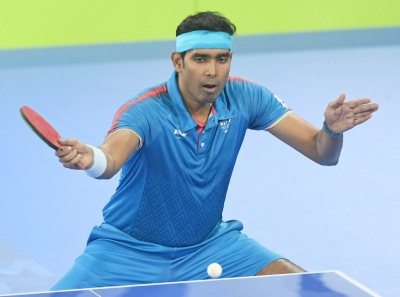 Sharath, who had already won gold in Men’s Team competition here, had along with his partner G Sathiyan lost to Drinkhall and Pitchford in the Men’s Doubles final, settling for a silver.

So, the Men’s Singles semifinals was a perfect setting for revenge for the Indians as Sharath was up against Drinkhall and Sathiyan was to play against Pitchford.

Sharath went up first and scored a superb win in a 6-game marathon thriller, winning 4-2.

He started aggressively and surged to a 2-0 lead, winning the first two games 11-8, 11-8.He attacked the English paddler and did not give him a chance to get into a rhythm.But Drinkhall was too experienced and fed on the support of the partisan home crowd as he won the third game 11-8, making it 2-1.Sharath widened the margin once again by winning the fourth game 11-7.But Drinkhall was not done yet and won the closely fought fifth game 11-8 to make it 3-2.

However, Sharath could not be thwarted as he won the sixth game 11-8 to seal the victory and reach the final.He won a bronze medal in men’s Singles in the 2018 edition and will definitely upgrade his medal.

Sathiyan had a chance of making the final an all-India affair but Pitchford had other ideas.He lost the match 1-4 and will now take on Drinkhall in the bronze medal match on Monday.

The day, however, belonged to Sharath as he set himself to win two medals on Sunday.

He won the silver medal with Sathiyan after losing the men’s doubles final and is scheduled to play the mixed doubles final along with Sreeja Akula against Malaysia’s Javen Choong and Karen Lyne.

However, he will feel the biggest satisfaction on reaching the Singles final at the age of 40.

The silver in men’s doubles was Sharath’s 11th medal in men’s table tennis making him the most successful table tennis player in the history of the Commonwealth Games.

Earlier this week, South African swimmer Chad Le Clos had joined shooters Michael Gault and Phil Adams as the most decorated Games athletes ever when he snatched his 18th medal.

Sharath has 11 and will take his tally to 13 as he is scheduled to play two more finals.