Guwahati, Dec 4 : Congress member and Leader of Opposition in Assam Assembly, Debabrata Saikia on Sunday lodged a police complaint against All India United Democratic Front (AIUDF) supremo Badruddin Ajmal for his remarks aimed at the Hindus. 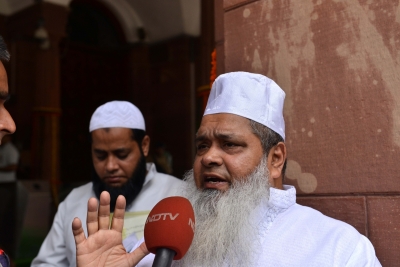 Several cases have already been filed against Ajmal even as he apologised for his remarks.

On Friday, Ajmal said Muslim men get married soon after turning 21 while Hindu men stay unmarried till the age of 40 to have illegal relations with at least three women.

Saikia in his complaint said that Ajmal’s comment caused “disharmony or feelings of enmity, hatred or ill-will towards the Hindu population, particularly Hindu women of India”.

He also asserted that Ajmal, the Lok Sabha MP from Dhubri, ‘promoted animosity’ between communities of different religions, “which is why stern action must be taken against the AIUDF supremo”.

The Assam Jatiya Parishad has already filed complaints against Badruddin Ajmal across the state.

Ajmal had tendered an apology for his remarks on Saturday.

However, he also claimed that his comments were twisted and given a new turn.

He said: “I had no intention of hurting the sentiments of any community.I have not targeted anybody.Yet, if it hurt anybody, I deeply regret for my statement.”

Ajmal further mentioned: “Being a senior person, I should not have made such statements.I apologise to everyone hurt by my remarks and I am ashamed of the statements.”

Earlier, while speaking to the media on Friday, Ajmal said: “Muslim men get married soon after they attain the age of 21 according to the law, while Hindus keep themselves unmarried till the age of 40 to have illegal relations with at least three women.”

He further said that this is why Hindus now-a-days have fewer children.

“After the age of 40, Hindus get married.How can they have children if they marry so late? When you sow only on fertile land, you can expect good results,” Ajmal added.

He advised Hindus to follow the same formula for getting married as Muslims do.

The AIUDF leader said if Hindu girls marry men at the age of 18-20 years, they can have a good number of children.

Ajmal’s comment has drawn wide-scale criticism from many corners.

Cong Leader Files Complaint Against Ajmal Over Remarks On Hindus

Cong Leader Files Complaint Against Ajmal Over Remarks On Hindus