Hyderabad, Dec 4 : Tollywood ‘megastar’ Chiranjeevi went down the memory lane on Navy Day on Sunday, as he shared a photograph on Twitter of his days as a naval cadet in the National Cadet Corps (NCC). 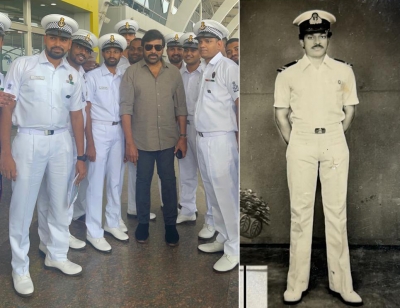 “When a bunch of Naval officers approached me for a picture at Goa airport last week, it took me down the memory lane effortlessly.to my days as a Naval Cadet.when I had enlisted for the NCC! Delightfully nostalgic it was,” tweeted Chiranjeevi with the hashtags ‘Happy Navy Day’ and ‘Goa Diaries’.

Within a few minutes, the tweet received more than 7,000 likes.

One fan shared the poster of ‘Chanakya Sapatham’, the 1986 movie starring Chiranjeevi.

The fan wrote that in this movie, the actor had the same getup.Chiranjeevi played the role of a Customs officer in ‘Chanakya Sapatham’.

Chiranjeevi (67) has acted in over 150 films in a career spanning four decades.

He was declared the Indian Film Personality of 2022 at the 53rd International Film Festival of India (IFFI) held last month.

Chiranjeevi Goes Down The Memory Lane With Naval Cadet Pic

Chiranjeevi Goes Down The Memory Lane With Naval Cadet Pic