Kolkata, Nov 30 : Trinamool Congress strongman and the party’s Birbhum district President Anubrata Mondal will continue to remain in jail, as the hearing on his bail plea in the Calcutta High Court remained inclusive on Wednesday. 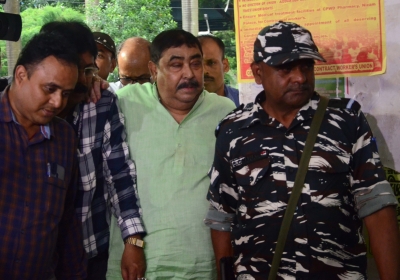 Although Mondal’s counsel and senior advocate Kapil Sibal moved his bail plea in connection with the multi-crore cattle smuggling scam in West Bengal, the CBI counsel sought more time to present his argument in the matter.

After hearing both sides, the division bench of justices Joymalya Bagchi and Ajay Kumar Gupta fixed December 16 as the next date of hearing.

Sibal, while moving the bail plea on behalf of his client, claimed that since Enamul Haque, the prime accused in the cattle smuggle scam, and BSF commandant Satish Kumar, a co-accused in the case, have already been granted bail, there is no reason why the same treatment should not be allowed in case of his client.

Sibal pointed out that Mondal is in judicial custody for 110 days now.

To this, Justice Bagchi questioned Sibal on the number of cases filed against Mondal.Sibal replied that two cases have been registered against him, the first relating to cattle smuggling and the other under the Prevention of Money Laundering Act (PMLA).

Justice Bagchi then asked Sibal since when Mondal is under judicial custody in the PMLA case.

When Sibal said since November 17, Justice Bagchi said this means Mondal is behind bars in the PMLA case not even for a month.

Thereafter, the division bench scheduled December 16 as the next date of hearing, and also asked the CBI counsel to file an affidavit in the matter by that date.

Mondal is facing a two-way attack from both the CBI and the ED in connection with the cattle smuggling scam.With successive objections by the CBI counsel, the special court of the agency in Asansol has been extending his judicial custody, including the last one on November 25.

The ED, on the other hand, is taking all steps to take Mondal to Delhi to question him at the agency’s headquarters there.It has already moved a plea for transit remand of Mondal at the Rouse Avenue Court in Delhi, which Mondal’s counsel has challenged in the Delhi High Court.

The hearing in the matter is scheduled in Delhi High Court on December 1.

Mondal has filed two separate cases in the Calcutta High Court on this count, the first related to his bail plea and the second related to quashing of ED’s plea to take him to Delhi.