San FranCisco, Aug 13 : A major Chemical leak incident forced the evacuation of more than 100 homes in within California’s Perris city, as well as closing the 215 Freeway in both directions.Perris is located 122 kilometers east of Los Angeles, reports Xinhua news agency. 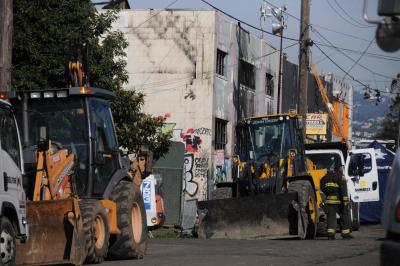 Local NBC 4 news channel reported that Cal Fire Riverside County received an emergency call regarding the Chemical leak at 7.40 p.m.on Thursday after a person discovered an extensive Cloud of smoke emanating from a train car on the railway that runs parallel to the Freeway in the town with more than 77,000 people.

Officials identified the leakage Chemical as styrene, and claimed that some type of Chemical reaction in the tank took place when the Chemical that is used in latex synthetic rubber, polystyrene and latex resins was kept in an overheated condition.

Typically, styrene is at about 29.4 degrees Celsius however, the 188,000 lbs of styrene in the tank was able to reach temperatures that ranged from to 161.7 degrees Celsius, Cal Fire Riverside County Chief John Crater told reporters on Friday.

As the pressure increased in the tank, and the styrene remained hot up, there is the possibility of an explosive event, Cal Fire Riverside County said, noting that firefighters were unable to get close to the area, and the styrene had continued to leak being leaking from the top of the tank as of Friday.

Crater stated that he had discussed with experts across the nation about the potential consequences of the leak, and added “what they’re saying to me is that this issue can be resolved in two days”.